How UPS Teamsters Can Win 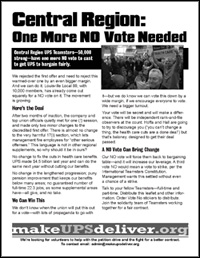 August 21, 2013: Hoffa and Hall say it is impossible for UPS Teamsters to win a thing. They won't bargain to protect healthcare, and they won't bargain for real changes in the Central Supplement. We say UPS workers can win. Here's how...

First, if your supplemental negotiators are working to win gains, then back them, including the rank and filers on your negotiating committee. Get involved. That's Teamster solidarity.

But that is not the case in many of the supplements, including the largest ones. The Central Region Supplement has a second crappy deal (currently under wraps) they are going to try to sell. They waited two months, then settled it in one bargaining session with zero input from UPS Teamsters.

Hall is meeting with certain officers (not with working Teamsters!) telling them how to scare members into giving up. First, he says he will not bargain to reverse the health coverage concession. Second, he says if members vote no again, it raises the possibility of a strike vote on the supplement because the third vote could be a strike vote, per the Teamster constitution.

We say: that is exactly what gives the members power!

If the Central Region Supplement – with 50,000 UPS Teamsters – is voted down, UPS is going to change their bargaining to avoid a strike vote.

Hall and UPS are counting on members giving up and eating the crap they are serving up in the second offer.

We are counting on a network of dedicated Teamsters, with support from some local officers.

What We Can Win

Better health benefits can be won. UPS can put increased money into the TeamCare fund, to match and guarantee current benefit levels. They made $4.5 billion in profits paying those benefits last year, and they can do the same next year. Sadly, the second offer in the Central Region does nothing on this vital issue.

Why is the amount of UPS's contribution to TeamCare kept a secret from members? Why isn't the weekly dollar amount written in the contract, just as the contribution to all other Health and Welfare funds is listed in the various supplements? Because they don't want you to see how much UPS is saving on this concession!

We can also win reasonable gains in the supplemental agreements and correct other concessions.

What Will It Take?

Hall is counting on the No vote going down. But we know there are more Teamsters out there to reach – in every local. The No vote can go up, and that will send a strong signal to the bargaining table. One more big No vote will put the ball in UPS's court, or they will face a possible strike vote.

Do you want to be part of making it happen? Teamsters for a Democratic Union (TDU) is looking for Teamsters who want to work together to win contract improvements with members who are making it happen. That's what TDU is all about.