September 15, 2011: The Hoffa administration has looked the other way while UPS has accelerated its SurePost program—a new service that allows UPS to deliver some residential shipments through the post office instead of package car Teamsters. 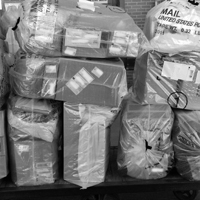 The SurePost programs targets online shippers with residential shipments that weigh less than 10 pounds. UPS Teamsters pick up and sort their packages. But final delivery is done by the Post Office.

The program is a boon for the company. The vast bulk of the work is handled by the cheapest labor at UPS—part-time sorters and hub workers. Meanwhile, package car drivers are largely cut out of the loop.

Package jobs are the majority of full-time jobs at UPS—and they are the backbone of every Teamster pension and benefit fund.

UPS claims that SurePost is needed to help the company compete with FedEx’s SmartPost program.

The Hoffa administration has parroted the company line. Package Director Ken Hall has repeatedly defended the program saying it allows UPS Teamsters to handle “tag-along volume”—packages from shippers that enter the regular UPS system because they don’t qualify for the SurePost program.

SurePost boosts UPS profits—but does it really protect Teamster jobs? Drivers across the country report the company is cutting and combining routes and package drivers are sitting at home.

At the Teamster Convention in June, Package Director Ken Hall said the union would not go to arbitration to fight SurePost because that would mean “letting the jobs go elsewhere.”

So Hoffa and Hall have given SurePost the green light without even leveraging a single concession from management or any brake on management’s runaway contract violations.

Hall says the International will “monitor the situation.”

In the meantime, the company continues to walk all over the contract. And Teamster drivers continue to drop off giant bags of packages for delivery by the Post Office.

Read a letter from a driver in Michigan about SurePost.

Send us a report about how SurePost is affecting members in your area.