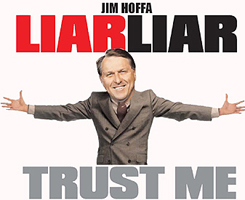 The Hoffa campaign is preparing a blitz of negative campaign mailers to spread his lies about Sandy Pope’s record.

Hoffa knows how to twist the facts. He was a corporate lawyer after all. It’s time to set the record straight.

Hoffa Lie: “Sandy has presided over the collapse of the Local 805 Pension Fund.”

Sandy Pope has faced the pension crisis head on and protected members’ benefits. Under Hoffa, members have suffered the worst pension cuts in Teamster history.

Under Sandy’s leadership, Local 805 increased pension benefits and won 25 & Out for the first time.

She also won protections to guarantee 25 & Out for every member within five years of retirement. Teamsters in the Central States and Freight Teamsters everywhere wish Hoffa had won these protections.

Thanks to Sandy, Local 805’s Pension Fund assets are up and is on track to full funding over time.

In this economy, Teamsters don’t expect pension miracles. They want and deserve a plan to protect their retirement security. That’s what Sandy Pope has delivered.

In tough times, Sandy Pope has negotiated strong contracts that protect members’ benefits. Hoffa tries to paint a picture of Local 805 has a shrinking local on the verge of bankruptcy. His campaign spin doesn’t match the facts.

Like many other locals—including Hoffa and Hall’s locals—Local 805 has lost members in recent years from employers closing and moving to nonunion areas.

Financially, Local 805 has reserves of more than $300,000. The local’s reserves have dropped to spend the union’s resources on organizing the nonunion competition.