June 1, 2010: “We ran for office on a platform of making our union work for the members. But now we’ve been run out of office by staff who thought change was just a campaign slogan. 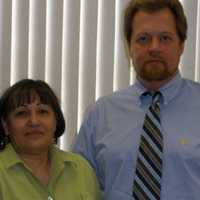 “This fall, members will get to vote for new Local 743 officers. They have the power to stop the power grab.

“The New Leadership Team will be running a reform slate of candidates this fall. We’ll be behind them and the fight for Teamster reform 100%.”

In May, Hoffa signed off on a power grab that ousts President Richard Berg and Secretary-Treasurer Gina Alvarez from office in Chicago Local 743.

Three years ago, Local 743 members voted for change. The New Leadership slate won the election and ended decades of corruption in the local.

When he took office, Richard Berg cut his salary by $70,000 and reduced bloated salaries and staff. Local 743 hired professional negotiators, put an end to backroom deals, and led a successful strike at SK Hand Tool.

But some of the officers who ran with the reform ticket complained when the New Leadership slate cut officer salaries and insisted on holding staff accountable.

“The New Leadership Team is a team fighting for a union that fights for every member,” said Jean Moore, a member at the UofC Medical Center. “That’s what the members of this local want, and our team will make sure they get it this fall.”