Navigating the Future of Our Union

How can we get our union back on the right track? That was the subject of Dan Campbell’s closing speech at the TDU Convention. 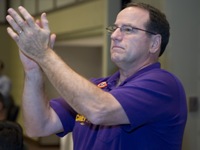 Dan CampbellLast Christmas my wife and I bought ourselves one of those GPS navigation devices.

The thing is pretty cool. You turn it on, it acquires the satellite and determines our location. Then you type in where you want to go and in just a few seconds it plots out the best route and starts talking.

And when you miss your turn or make a mistake it immediately says, “recalculating!” and then it plots out a course to get you back on track to your destination.

This type of device is what our union needs.

Well, you know friends our union actually has such a device—we call it Teamsters for a Democratic Union.

For 32 years it has been TDU members who have told the truth about where our union is and where it needs to go.

For 32 years it has been TDU who has plotted the best route for the union to achieve an active and educated rank and file.

For 32 years it has been TDU that has shown the way: “Turn left. Turn right. Continue straight ahead.”

And for 32 years, when our Union misses a turn or goes in the wrong direction it has been TDU that says loud and clear:

And that is what we have been doing here in Cleveland for the last few days—recalculating.

Our Union has gotten way off course and it needs to get back on track.

Teamster members know this in every Local Union and they are frustrated, mad and looking for some help to get things back on course.

In every workplace, where things are not going as they should, there are Teamsters who want to do something about it.

Our goal, when we go back to our areas, is to find them, recruit them and ask them to join TDU.

We need their energy, ideas, enthusiasm and their voice. After all, how are we going to turn around this great Union of ours without them?

How are we going to have the volume we need to shout “recalculating!” loud enough to be heard by our union officials?

So our goal for the upcoming year is clear.

Among all our activities that are so important the most important is go, find and recruit those thousands of new activists we will need to get our Union back on track and going in the right direction.

Start with just one person. Ask them to join TDU. It isn’t that hard. You can do it.

In closing, I want to thank you all for coming to Cleveland in these hard times.

Be proud. For 32 years people just like you and I have kept the TDU going and growing.

For 32 years we have sat on the dashboard of the IBT yelling out:

If there were no TDU who would do this?

Let’s go out and build our movement stronger and louder in the coming year.

Keep recalculating and we will see you next year.

Dan Campbell is a member of the TDU International Steering Committee from Local 200 in Milwaukee.

Click here to get membership cards that you can use to recruit other Teamsters to TDU.