January 24, 2011: With the help of an inflatable rat, Local 804 members are blowing the whistle on UPS management. 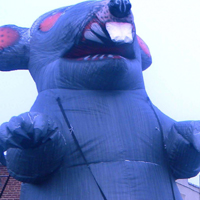 Local 804 package car driver Tony Lawrence is back on the job thanks to solidarity from his fellow members and an assist from an inflatable rodent.

Local 804 Teamsters erected a giant inflatable rat in front of UPS to protest the firing of Lawrence, a shop steward and 30-year member. Lawrence invoked his “Innocent Until Proven Guilty” rights under the contract, but management walked him off the job without even notifying the union.

The response by Local 804 and the members at Mt. Vernon was swift and decisive.

The very next morning, Local 804 officers and members rallied in front of the Mt. Vernon building, along with an inflatable rat to symbolize management’s anti-worker practices.

Drivers at Mt. Vernon pledged not to answer management calls to their cell phones or to speak to managers or supervisors except as required by the job.

The intent was to send a message. And it worked. Lawrence promptly returned to work.

“I was overwhelmed by the support I got,” Lawrence said. “The way the guys rallied left me speechless. It means a lot and I want to thank everyone. This is the kind of unity we need.”

The inflatable rat also made an appearance in front of the UPS hub in Maspeth, Queens. UPS laid off nearly 50 air drivers on Christmas Eve—via text message no less! Clerk and Article 22.3 jobs are also under attack. In the meantime, supervisors can’t keep their hands off of union work.

Local 804 is holding a workshop and strategy meeting on Strategic Contract Enforcement to discuss action to stop supervisors working and defend members’ jobs.

Supervisors should never be doing our work—but especially when our members are on layoff.

Local 804 members also voted to buy an “inflatable” for use at future union rallies at UPS. How do you top an inflatable rat? Stay tuned.