March 10, 2014: Over 120 active and retired Teamsters packed the house on March 8 in Richfield Ohio to learn about Congress being lobbied right now to undermine pension law, and the battle to save our pensions. The meeting was organized by Teamsters for a Democratic Union and a committee of Northeast Ohio Teamsters who have been active in defending their retirement security.

The committee is now planning more actions, along with outreach to Teamsters and to contact Ohio Congressional Representatives. 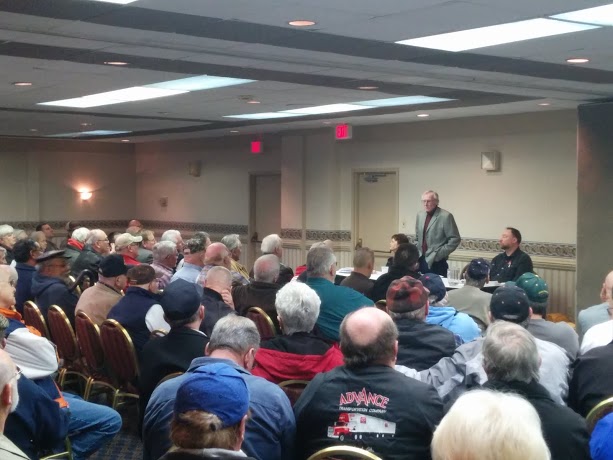 Alex Adams, a retired YRC Teamster and past president of Cleveland Local 407, informed active and retired Teamsters on a visit he and other Teamsters made to Washington in October 2013. At that congressional hearing, Tom Nyhan – executive director of the Central States Pension Fund, testified that pension cuts need to be made so the fund can survive long-term. Adams reported that the rank & file Teamster delegation had support form the International Association of Machinists, the Pension Rights Center, and the AARP in opposing the cuts, and co-sponsored a press conference where Adams spoke.

Ann Curry Thompson, a pension rights attorney who works with TDU, outlined how the National Coordinating Committee for Multiemployer Plans (NCCMP) has spent the last two years lobbying Congress to rework current pension law. She reported the NCCMP proposes changing the law to allow troubled pension funds, like Central States, the ability to cut already accrued benefits. Thompson said this could slash the benefits of those already retired, as well as those still working.

Active and retired Teamsters from Locals 407, 24, 507, 348, 413, 92, and 964 signed the petition opposing the cuts and formed a committee for Northeast Ohio. The committee is planning visits to local congressional offices and outreach to Teamster locals and their retiree groups. They also plan to prepare for organizing a delegation to visit Washington when the next round of hearings is held.

“It was a great turnout and a good start to getting more organized” said Greg Smith a retired YRC Teamster. “We earned our pension benefits and it’s clear that many Teamsters are ready to fight to make sure we keep them.”

Clik here to become part of the fight to defend Teamster pensions.

TDU is organizing more pension forums. Contact us if you are interested in one coming to your area.