March 20, 2014: Over 80 active and retired Teamsters filled the chapel at Macalester College in St. Paul, Minnesota to learn about the move afoot in Congress to weaken pension protections, and what is being done to stop it.

The meeting was organized by TDU and a committee of Twin Cities Teamsters who are organizing to defend their retirement security.

Bob McNattin, a retired member of Teamster Local 120, spoke of the importance of maintaining retirement security not just for Teamsters, but for all working people. He stressed that the threat to reduce pensions would be devastating and could ripple through the economy.

He highlighted the fact that he and many Teamsters had passed on substantial wage increases over the years because they were told the money needed to go to pension contributions to provide a good retirement. 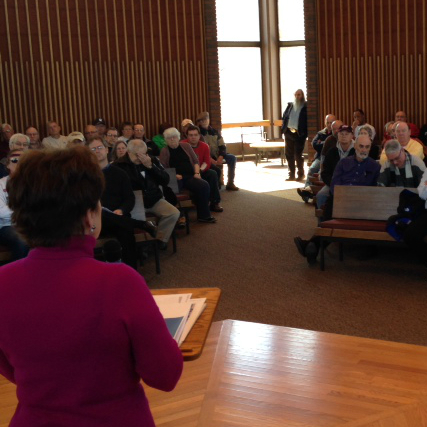 Ann Curry Thompson, a pension rights attorney who works with TDU, outlined how the National Coordinating Committee for Multiemployer Plans (NCCMP) has spent the last few years lobbying Congress to rework current pension law. She reported on the NCCMP efforts to allow troubled pension funds, like the Central States, the ability to cut already accrued benefits. Thompson said this could slash the benefits of the already retired if a new law should be passed. That is illegal under current law.

The NCCMP, with the support of the leaders of the Central States Fund, is aiming to get a bill into Congress very soon, so the time to step up and fight back is now.

Active and retired Teamsters from Locals 120, 638, 974 and 1145 signed the petition opposing the cuts. The Twin Cities Pension Action Committee is planning visits to local congressional offices and outreach to Teamster locals and their retiree groups.

“We worked hard over many years to insure a secure retirement, said Sam Karam – a YRC Teamster. Now we need to organize to make sure we keep what was promised. This is no reward or bonus for our later years. We earned it.”

Click here if you want to become part of the fight to defend Teamster pensions.

Click here if you want to help organize a pension meeting for your area.