Passing the Buck on 9.5 Violations

August 11, 2010: Are long days, production harassment and 9.5 violations a problem? Not to Hoffa and Ken Hall.

Hall told stewards on a national conference call in July that, “The 9.5 language isn’t perfect, but it is getting better.” It’s a strange claim to make—since Hoffa and Hall have spent the last two years watering down that very language.

Before the current contract, any package car driver could file a grievance if they worked over 9.5 on three days in one week. But Hoffa and Hall gave this right away. Instead, the new contract created an opt-in, opt-out list. Only drivers on the opt-in list would have the right to file 9.5 grievances.

But even this milk-toast language was never enforced. In most areas, UPS never put up the lists. And mid-contract, Hoffa and Hall agreed to water down the language even more. Now you have to work over 9.5 three times in a week just to have a right to qualify for the list. Then you have to go into the manager’s office and request to actually be added to the list.

“Our experience is drivers who do that get squeezed,” says steward Dan Scott of Local 174 in Seattle. “They get a three-day production ride and then the fight starts over the numbers and threats of discipline for production.”

Having created this monster, Hoffa and Hall pass the buck.

“Our members say the company is abusing 9.5,” Hall said on a national conference call, but, “We see very few grievances that make it to the national level.”

First, Hoffa and Hall watered down the 9.5 language to make it harder for members to file grievances. Now, they blame the lack of 9.5 grievances on the members. 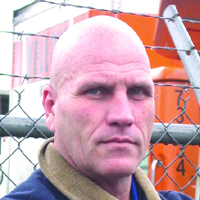 “It’s been brutal all summer long. The company has been putting as few package cars on the road as inhumanly possible and just burying the drivers.

“The IBT’s agreement to water down the 9.5 rules is a double whammy for us. Now you have to go in to the center manager if you want to get on the 9.5 list.

“Our experience is drivers who do that get squeezed. They get a three-day production ride and then the fight starts over the numbers and threats of production discipline.”