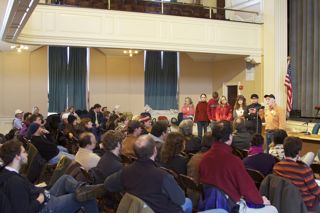 United by the slogan, “We’re all on this bus together,” passengers, drivers, mechanics, students and members of other unions, crammed a City Hall auditorium to back drivers’ contract proposals to protect drivers and improve bus service.

Drivers voted down a proposed contract by 36 to 1 in November. They want an end to 18-hour split shifts with forced overtime, a fair grievance procedure, and reasonable schedules that provide reliable service without jeopardizing passenger safety.

“We want the drivers to be able to drive safely,” Nancy Welch, an English professor at the University of Vermont and member of the United Academics union, told the Burlington Free Press.

Students who attended the rally told the media they were backing the drivers’ demands for safety and respect because they depended on CCTA for transportation. 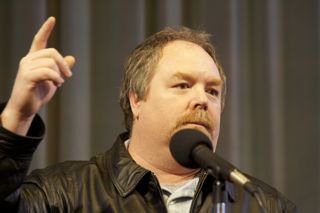 Mike WalkerNotably absent from the rally were any officials from Teamsters Local 597. Secretary-Treasurer Ron Rabideau demanded that the Vermont AFL-CIO Central Labor Council retract its call for solidarity with the Teamster drivers.

Union members and the community turned out at City Hall to support Teamster members all the same.

The CCTA responded to the rally by convening an emergency board meeting. It’s up to Transit Authority brass to decide if they want to negotiate a fair agreement or take on a growing community-labor alliance for a better CCTA.