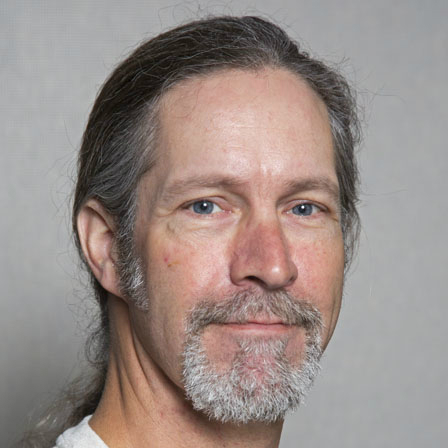 How did you become a Teamster Carhauler?

In the early 90’s, I was working as a heavy wrecker operator that had contracts doing recovery work for carhaul companies like M&G Convoy. I was helping a carhauler swap tractors and we shared how much we made. When he told me what he was paid, I said “a month?” “No,” he says, “a week.”
I applied at Leaseway and showed up with pizza and donuts more than once. I wanted the job so bad. I got it, and worked there for 17 years before they closed and Cassens took over the contracts.
How did you first get involved as a union activist?
I saw what the union really meant when I had a bad wreck when I was just 9 months on the job. A bee did it! The A/C had cut out and I had the windows rolled down. A bee flew in and stung me on the back. I swerved trying to get the bee off me, and the trailer got caught in a culvert. I held on for a quarter mile, trying to get out of the culvert, before finally rolling over.
The union stepped up and defended me. So I learned quick the power the union has to protect its members and what a union contract means.
You recently were elected steward. What motivated you to become a steward?
I became too fed up with management nit-picking. I started to study the contract and challenge them, and our own stewards and BAs.
I noticed that whenever I couldn’t make it to panel—on my own dime—to present a grievance, I’d lose. When I did make it, I’d win. So I was wondering what deals were being made behind our backs. So I stepped up to try to help our members and build the union again.
Any tips for other new stewards?
Read the contract. There’s power in knowledge, and it makes all the difference in the world if you know the contract and how to enforce it.
Use info requests and get familiar with filing NLRB charges. If you prepare a grievance like you’re going to go before a judge, you’ll prepare a solid case.
Be transparent. Don’t hide things from members, but get them involved as much as you can. Don’t be like the priest who tells people to stop reading the Bible and just obey what he says.
Another thing we’ve done is to build a network. We’ve organized a network of Cassens stewards, using Facebook and conference calls. Management is constantly sharing strategies and information, why shouldn’t we do it too? We’re in touch with Teamsters from all over the country.
What are the biggest issues facing Teamster carhaulers today?
The present IBT leadership is setting us aside. It was almost unheard-of to see non-union railheads and plant-sites when I started. Now, it’s reversed, non-union is the norm.
We need to get back to organizing. And a serious issue is making sure we defend our pensions. What does the union have to offer? A contract, and a good pension. We need to protect those if we’re going to reverse the non-union trend.
What should the union be doing better?
We need to get smarter and more aggressive representation. We need leaders and BAs who know the issues and know what members deal with.
A big challenge is taking on ‘right-to-work’. We have to change the union image. Members can’t just go to work, pay the bills, shut up and think their union and pension is going to be there tomorrow. Everybody has a voice, and an obligation to be union proud.
Time is of the essence. That’s why the immediate thing is to elect new leaders who can revitalize the members.
What’s next for 2015?
We just hosted a Carhauler conference call with the Teamsters United campaign with more than 300 members on it. Amazing! We’re going to be organizing locally, taking days off, planning face-to-face meetings, to build the campaign.
2015 is a critical year for us. We’re down to just two companies and we’re negotiating a new contract this year. We’re going to use our stewards network and pull together new networks to police the contract and organize so we make sure the companies and union leaders hear what carhaulers need loud and clear.
news Carhaul Teamster Voice 293 Summer 2015
Do you like this post?
Tweet
Get Advice Join TDU Donate