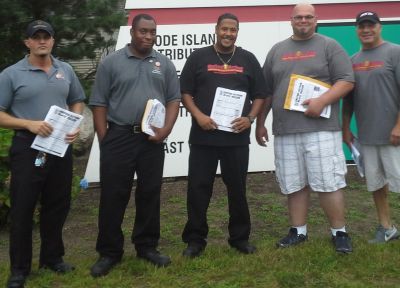 August 9, 2013: Teamsters in Providence, R.I. have been building a movement for change in Local 251. Now they are running for office as the United Action Slate.

Earlier this year more than 1,200 members joined a United Action petition drive to reform the Local 251 bylaws and give members the right to elect their shop stewards and contract negotiating committees, and to vote on officer salaries.

These issues struck a chord. More than 800 Teamsters turned out for the largest union meeting in years.

The majority voted with United Action in favor of bylaws changes. But the incumbent officers blocked the reforms with a provision that required a two-thirds majority to change the bylaws.

"The members spoke loud and clear. They'll have a chance to speak again this fall and we won't need a two-thirds majority to win the election," said Matt Taibi, a UPS Teamster and United Action candidate for Secretary-Treasurer.

United Action is running on a reform platform involving members and rebuilding union power, including:

The largest employer in Local 251 is Rhode Island Hospital. Paul Santos, the United Action Candidate for President, is one of several members of the original organizing committee that brought 2,500 employees there into the Teamsters.

Ironically, their Assistant Business Agent was a member of the management-backed Vote No Committee during the union organizing drive. No wonder members feel that she's on management's side and not the members'!

"I've been a union guy my whole life. I helped get the Union in to Rhode Island Hospital to give everyone a voice. To see us in a union that doesn't act like a union doesn't sit well with me," Santos said. "I want people to be respected again. This is why I organized to begin with and this is why I'm running now."

Find out more about the campaign at www.251unitedaction.org