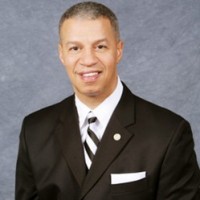 Gregory Carter, a St. Louis Alderman and Local 688 Teamster, was tragically killed in a traffic accident while working at UPS. Teamsters for a Democratic Union sends our condolences to Brother Carter's friends and family.

Below is an article from The St. Louis American on Brother Carter's extraordinary life and tragic death:

Wednesday, August 1, 2012 -- St. Louis Democrats, locked in bitter struggles over the August 7 primary, were unexpectedly united in sorrow Wednesday morning by the death of 27th Ward Alderman Gregory J. Carter. He was killed in a traffic accident very early Wednesday morning at the age of 54 while driving a shift for United Parcel Service.

Carter–known in political circles as a constituent-oriented politician who kept his word and made few enemies—inspired a universal outpouring of shock and grief in the St. Louis political community.

"The City of St. Louis has lost an exceptional public servant, and I have lost a dear friend," said U.S. Rep. Wm. Lacy Clay.

"This morning the people of St. Louis lost one of our biggest advocates for fairness and equality," said Aldermanic President Lewis Reed.

"His true passion was serving his community and not involving himself in political squabbles," said License Collector Mike McMillan, Carter's former office mate at the Board of Aldermen.

"Alderman Carter was a vigilant advocate for his ward and all of St. Louis," his colleagues in the African American Aldermanic Caucus said in a statement. "He was greatly concerned with the plight of the poor and disenfranchised."

Alderman Antonio French used social media like a mourner's guestbook at a viewing all morning. The outpouring of grief and condolences he shared was all but endless.

Particularly with the political community locked in so many struggles for contested Democratic primaries, the sudden loss of one of their own had a widespread sense of unreality.

"I actually was talking to him at 11 o'clock last night about something we were doing for Tishaura, getting ready for election day–going over what we had to do today, a list of things we needed help on."

"Tishaura" is Tishaura O. Jones, a close family friend of the Carters who is campaigning for city Treasurer in a contested primary. In her grief, she addressed the deceased as "Uncle Greg."

"All my daughters call him 'uncle,'" said Virvus Jones, the former comptroller and Tishaura's father. "Greg treated all my daughters like nieces. He was more than a friend. He was a family member to me."

"He actually was my uncle," Chris Carter said, "but he was an uncle to many in the neighborhood who did not have anyone. He put a lot of people before himself and before his family."

His many grieving friends and colleagues struggled not to recite clichés at the passing of someone who actually merited them.

"I know it sounds corny and we're in an environment where people don't believe much in the good of public figures, but Greg really did care about his constituents," Mike McMillan said, "and he raised the bar of service delivery to make sure his ward, North St. Louis and the entire city were drastically improved with as many resources as possible."

Many reflected that Greg Carter was as universally liked as it is possible to be in politics, a competitive and frequently deceitful arena.

"Greg didn't make enemies because he always gave it to you straight," Chris Carter said. "You never looked at him to turn on you. He always told you up front how it was going to be and where he stood–and he stayed there."

Son of the 27th Ward

A native St. Louisan, Greg Carter was the son of Willie Carter Sr. and the late state Senator Paula J. Carter. He grew up on the city's North Side in the 27th Ward, where he was first elected alderman in April 1993.

He graduated from Northwest High School and studied at Southeast Missouri State and Columbia College, earning a bachelor's degree in business and marketing. He had been an employee of the United Parcel Service since 1984.

At the time of his death, he was chair of the Board of Aldermen's Public Safety Committee and vice chair of the African American Aldermanic Caucus. He also served as executive director of the Paula J. Carter Foundation, lifetime member of the NAACP and member of the National League of Cities, 100 Black Men of Metropolitan St. Louis and H. McGhee Lodge #3, Prince Hall Free and Accepted Masons of Missouri.

According to the City Charter, there will be a special election to replace Alderman Carter held between 75 and 90 days from his death. The candidate will be chosen by the committeepeople of the 27th Ward, and then will have to run again next March.

His successor faces a huge challenge to replace him.

"Greg loved his neighborhood, his job, serving his people–and his legacy will live on," Chris Carter said. "Whoever takes Greg's spot will have a tough job. They will have to spoil our constituency, because that's what Greg did."