September 15, 2011: I’m on the plane headed back to New York after a week on the campaign trail. I talked to thousands of Teamsters. And the response is incredible. 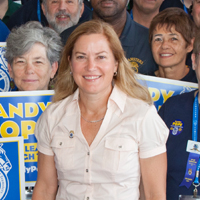 In Pennsylvania I had breakfast with over-the-road drivers who are spreading the word about our campaign terminal-to-terminal.

In Kentucky and in Maryland, I talked with UPSers who are tired of having a Teamster General President who is in love with management.

And in Tennessee, I met Teamsters from carhaul and UPS Freight who say Hoffa has given up on them—and they’ve given up on Hoffa.

The support is out there to win this election and elect new leadership. The Hoffa Campaign’s own polls show that I am the only candidate for General President who can beat Hoffa.

That means we need to talk to 150,000 Teamsters in the next few weeks to get their support and mail in their ballots.

When the ballots go out, my campaign will be sending targeted mailers to hundreds of thousands of likely Teamster voters, and coordinating phone banks to turn out the vote.

There is a role for every Teamster who wants a new direction for our union. And now is the critical time to get involved.

Go to my website or call my campaign office at (718) 282-0282 to get leaflets and spread the word to Teamsters in your area. Order and post pole signs.

In the coming weeks I’ll be meeting with Teamsters in Minnesota, Chicago, Ohio, New York, and at the TDU Convention.

Get involved and be part of Teamster history.