December 20, 2010: The weather was terrible with wind and rain when we brought Sandy Pope to meet with Teamsters here in Sacramento. Nevertheless, we got a great response from the members we met and we’ve formed a committee of members to put together a delegate slate supporting Sandy.

First stop was Campbell’s Soup, the second-largest employer in Local 150. We had already been petitioning there before, so members were familiar with Sandy and excited to meet her. 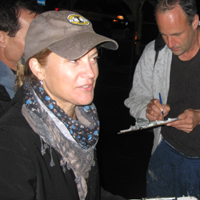 Sandy Pope at the West Sacramento UPS building. Local 150 Teamsters have launched a local campaign committee.The next stop was the West Sacramento UPS building. It was pouring down rain but we brought two pop-up canopies and set them up in front of the entrance. Almost every member who came through got a chance to meet Sandy, shake her hand and talk to her about the issues we’re facing at UPS.

On Saturday, we had a members’ meeting where Sandy spoke to 50 members about building support in our area, the changes she wants made and the future of the Teamsters. We gathered more petition signatures, collected donations for Sandy’s campaign and have a group organized to assemble a delegate slate supporting Sandy.

Now that the petition drive is over, we’re going to go back to Campbell’s and UPS with a Thank-You message for signing the petition, to let members know they helped make an impact.

From our perspective, it was a very productive weekend. We raised money for Sandy’s campaign, obtained hundreds of petition signatures and we introduced her to over a thousand members. It was well worth getting a little wet in the rain.

To find out more about how you can get involved, contact TDU or the Sandy Pope Campaign.