Standing up for Good Union Jobs

February 2, 2012: A bad economy. A presidential election. All eyes are on good jobs and how to create them.

The Teamsters Union can stand up for good jobs—starting right in our own contracts.

It’s a presidential year and all eyes are on the economy, good jobs and how to create them. 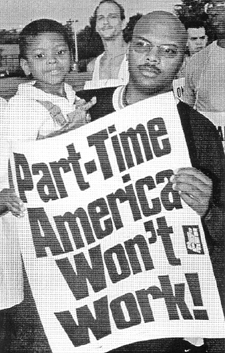 President Hoffa has done a good job in the media speaking out for jobs—including a federal Jobs Bill that would put construction Teamsters to work rebuilding our infrastructure.

But with 1.3 million members, the Teamsters Union can do more than call for good jobs: we can fight for them—by enforcing our contracts, taking on subcontracting and job elimination and bargaining contracts that create new full-time jobs.

Teamsters for a Democratic Union (TDU) brings Teamsters together—from every industry and the public sector—to win and protect good jobs.

The new issue of Teamster Voice highlights a series of attacks on Teamster jobs—and opportunities for our union to defend our work and fight for good union jobs.

The 1997 strike at UPS forced the company to combine 40,000 part-time jobs into 20,000 full-time jobs. Today, the company is cutting driver jobs and full-time combo jobs—and packages are being subcontracted to the Post Office.

That includes UPS Freight, where subcontracting has gone unabated for years. Through TDU, UPS Freight Teamsters are networking nationally to take on subcontracting and gear up for next year’s contract negotiations, where the fight against substandard union jobs will come to a head.

TDU works to inform and unite Teamsters in every local to protect good jobs—whether you work under a national agreement or a local contract, for a private company or in the public sector. We’re all in this together in the fight for good jobs and a better future.