TDU Viewpoint: We Stand With Wisconsin

March 10, 2011: The attack on public employee unions in the Midwest is about more than collective bargaining rights. It’s a corporate attack on democracy itself. 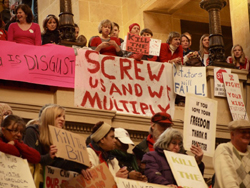 WisconsinUnion members and concerned citizens are fighting back. TDU stands with Wisconsin and working people everywhere who are mobilizing to defend our union rights and our democracy.

Republicans in the Wisconsin Senate have voted to strip most public employees of their collective bargaining rights. They rammed through this anti-union legislation while every Democratic Senator was out of the state—violating Wisconsin’s Public Meetings laws in the process.

Wisconsin Governor Scott Walker did not run on a platform of gutting union members’ rights. Walker launched this crusade only after he was elected and has no democratic mandate for his radical measures. In fact, 60 to 70 percent of Wisconsin residents oppose the measure.

MichiganTeamsters for a Democratic Union (TDU) is a nonpartisan organization. We do not endorse Democrats, Republicans or any political party.

But TDU very much involves itself in working people’s struggles to have economic justice and a voice in our democracy. These are the very ideals under attack in Wisconsin—and across the Midwest.

On the same day, that Wisconsin politicians voted to strip public employees of their union rights, the Michigan State Senate passed an anti-union bill that goes even further. 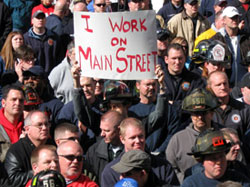 The real goal is not tackling budget deficits. If it was, states would be going after the Wall Street bankers and CEO’s whose reckless schemes caused the economic collapse.

No, the real goal is corporate control—not just of our jobs, but of our democracy.

Union members and the public are flooding state Capitols and fighting back. These struggles show what the labor movement can be.

Corporate politicians are trying to pit workers against each other—union vs. nonunion, public sector vs. private sector. Instead, they’re bringing us together.

This is what corporate America is afraid of.

The full power of our Teamsters Union needs to be put behind these struggles.

Let’s give Corporate America a reason to be afraid.