Teamsters Do Their Own Assessment As ABF Claims Big Losses

January 28, 2013: You know it's time for negotiating the next contract when ABF starts bombarding members with the message that times are tough.

So tough that the company claims a loss of $230 million since 2009. The company has mailed a DVD explaining the state of their finances and upper management has visited a few terminals to plead their case.

"It makes you wonder how much ABF spent on this," commented Doug Wylie, a city driver out of Worcester, Mass. "Management had Teamsters watch it in the terminal on the clock. And on top of that, on the busiest day of the week, my manager had me watch another video on the basics of the pallet-jack and lift-gate deliveries. I'm beginning to understand why they have a difficult time making a profit."

Members remember similar cries of poverty in 2010. They voted down an attempt to secure concessions and may have to prepare for a similar vote when the proposed contract comes up for ratification.

Teamsters have cited the $185 million purchase of Panther, the increase in upper management salaries and perks, and other aspects of ABF expenditures as the likely reason for ABF showing little gain over recent years.

"It looks like the IBT did some good research on ABF finances and are prepared to take a no giveback stance," said long time TDU activist and Milwaukee city driver Paul Host. "Members need to stand strong and not fall into the trap of ABF's propaganda."

Stay informed at NoFreightConcessions.org. No Freight Concessions is a network of freight Teamsters working together to defend the contract and say NO to any further concessions in freight. 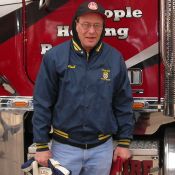 "It looks like the IBT did some good research on ABF finances and are prepared to take a no giveback stance.

"Members need to stand strong and not fall into the trap of ABF's propaganda."