January 24, 2011: A coalition of Teamster locals is fighting to protect warehouse distribution jobs in the Northeast. 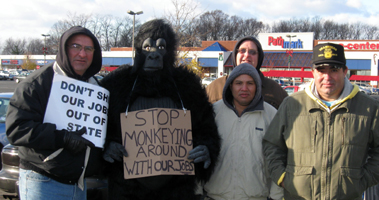 Local 863 members are leafleting to warn customers about the destruction of good jobs when our communities need them most.C&S, the largest third party warehouse distributor in the country, is threatening Teamster jobs up and down the East Coast. The company has issued a WARN Act notice and announced plans to eliminate 1,400 Teamster jobs.

For years, C&S has managed A&P’s warehouse distribution work in New Jersey, under a Teamster contract. Now, C&S wants to move the work to nonunion facilities in Pennsylvania and Chester, N.Y.

C&S management is trying to negotiate a severance package and kick Teamster members to the curb. But New Jersey Local 863 has refused the severance deal—and is standing up for good union jobs at the bargaining table and in the streets.

Local 863 and a coalition of locals are putting pressure on C&S by leafleting A&P, Pathmark and Food Emporium to warn customers about the destruction of good jobs when our communities need them most.

The next move by the coalition is to leaflet at retail outlets of another C&S customer.

Local 639 and Local 730 are leafleting stores in D.C. Their jobs are under attack by C&S too. C&S has also threatened to pull work out of Boston Local 25 and Buffalo Local 264.

A&P, which declared bankruptcy in December, has outsourced its New Jersey warehouse distribution to C&S for years—and C&S is going to continue performing that work. The question is whether those C&S jobs will be good Teamster jobs—or nonunion jobs with low wages and benefits.

New Jersey C&S is the biggest concentration of union jobs at the mostly nonunion C&S. A battle line has been drawn. Teamster jobs and industry standards across the Northeast are at risk.

The International Union is calling on A&P to intervene and get C&S to hold off on moving until a satisfactory solution for Teamsters and A&P is found.

The judge in the bankruptcy case is allowing A&P to bid out the distribution work. Local 863 is hopeful that a union friendly company will get the bid and keep 1,400 Teamster jobs in NJ.

In the meantime, Teamster members are keeping the pressure on and widening their customer outreach campaign.