April 8, 2015: Over 100 Teamsters from across the Midwest and South converged on the Rosemont Convention Center today to voice their objections to possible pension cuts by the Teamster Central States Pension Fund. 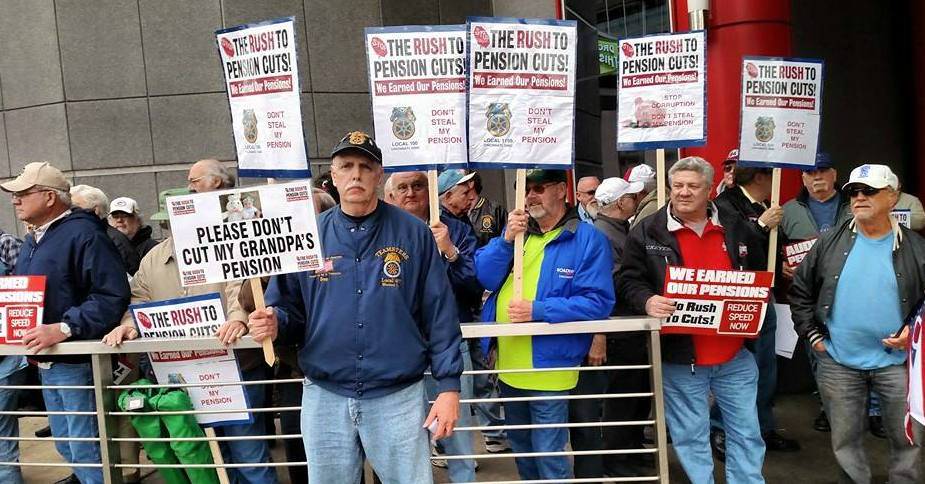 "We're here today because we worked hard, sometimes gave up raises, to earn a decent pension,” said Greg Smith, a retiree from Akron Ohio Local 24. The retirees talked with officials and passed out a leaflet to them, as they entered the meeting called by the pension fund.

In that meeting, fund director Thomas Nyhan told Teamster officials that pension cuts are the only answer, and laid out a timeline.

Nyhan was a principal supporter of a bill that sneaked through Congress as an amendment to the federal budget last December, to allow troubled pension plans to make cuts in already-earned pensions.

The rally was called by committees that are part of a growing movement to defend pensions.  Groups travelled from Wisconsin, various Ohio cities, Iowa, Tennessee, Michigan, Georgia, Missouri and other areas. The Wisconsin Committee to Protect Pension spearheaded the rally.

Nyhan reported that they will immediately mail a preliminary letter to 65,000 active Teamsters and 210,000 retirees and others who have earned a vested pension. His timeline calls for cuts to be announced to each member early this summer.

Under the new law, all retirees and active Teamsters will then get a vote. Even though that vote can be voided, it is a crucial tool to send a signal where we stand, and the pension movement will make the most of it. That vote could come by late summer. The fund has a new website page to explain their plan for pension cuts.

Nyhan wants the cuts implemented by a year from now. That gives us time to head them off and work for better solutions. 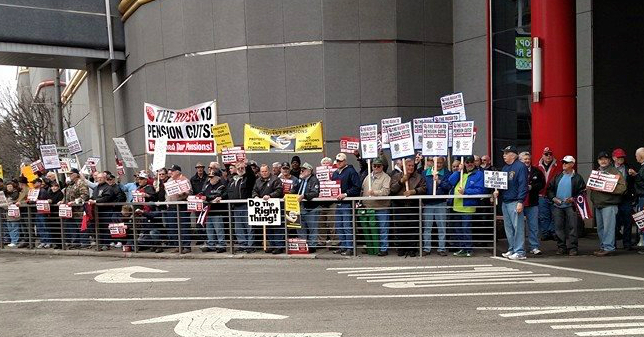 The pension movement, Teamsters for a Democratic Union (TDU) the Pension Rights Center, in alliance with the AARP and various unions, is calling for change to the pension cut law so that the full burden of pension problems does not fall on retirees, who earned their pensions.

Hoffa sent International vice president John Murphy to gladhand retirees at the rally. He repeatedly claimed that Hoffa is “on your side” fighting the cuts. Then he walked in and heard Hoffa’s other representatives, such as international trustee Jim Kabell and the Teamster trustees of the fund, tell officials to sell members and retirees on getting their pensions slashed.