September 11, 2009: Members are uniting for change in Puerto Rico, as a series of scandals have rocked their local union. 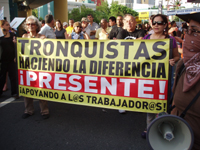 TDU members and other reformers march with a banner supporting the Teamsters Making the Difference Slate.As Convoy-Dispatch goes to press, Local 901 principal officer Germán Vázquez may have already cut a deal to resign from the union after he was caught embezzling more than $55,000 in union funds.

According to an investigation by the Independent Review Board, Vázquez took four improper pay hikes totaling $55,532 between January 2005 and May 2009.

Vázquez’s expected resignation will end his union career, but not the big problems in Local 901—where the Executive Board faces a series of legal charges for violating members’ rights.

The Department of Labor is suing Local 901 for election violations, charging that the local ran last fall’s voting to illegally favor the incumbents against the Tronquistas Haciendo la Diferencia slate (Teamsters Making a Difference).

The National Labor Relations Board is also taking action against Local 901 officials—charging them with retaliating against members for supporting the reform candidates for union office.

The Department of Labor has sued Local 901 for violating members’ rights to a free and fair election, and is demanding a new, fair vote.

Local 901 officials also expelled three of the reform candidates—Mara Quiara, Migdalia Magriz and Silvia Rivera— from the union and fined them $10,000 each on trumped-up charges of leading an illegal 3-day strike at Coca-Cola.

Not only do Local 901 officials have no case; they themselves face legal charges for violating members rights’ at Coke.

The National Labor Relations Board has issued a complaint against the union for failing to represent strikers who were illegally fired by Coke—charging that Local 901 officials refused to represent the members because they supported reform candidates for union office.

They are holding rank-and-file meetings and building a grassroots communication and information network.