March 2, 2009: Teamsters at Oak Harbor are returning to work after standing strong on the picket lines, but the fight for a good contract continues. 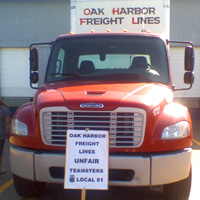 Teamsters striking against Oak Harbor Freight Lines in the Pacific Northwest made an unconditional offer to return to work on Feb. 12, and at the end of February they began to close picket lines to reclaim their jobs. But the union and company remain far apart on bargaining.

About 600 Teamsters at 35 terminals in Washington, Oregon, and Idaho walked out on Sept. 22, when the company demanded to gut the contract and benefits, and committed unfair labor practices. The contract expired a year earlier, in October 2007.

Also, the company has fired 12 Teamsters during the strike on various allegations.

The sides remain far apart, since the company wants to gut Teamster benefits and conditions.