Teamster members across the country are organizing for new leadership and a new direction in our International Union.

This time Local 804 President Tim Sylvester, Local 89 President Fred Zuckerman and other Teamster leaders are building a coalition effort that is uniting Teamsters, including former Hoffa supporters, in one movement for a stronger union.

Get involved with Teamster officers and members who are building a movement to elect new International Union leadership and rebuild Teamster power. 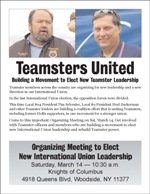 Click here to RSVP for the March 14 meeting in NYC. 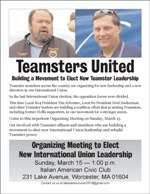 Click here to RSVP for the March 15 meeting in Worcester.

Help spread the word! Download and pass out leaflets for the NYC March 14 and New England March 15 meetings.

Email takebackourunion2016 [at] gmail.com if you have any questions about the meetings.