It's Time for Some Honesty About the Dishonesty Language 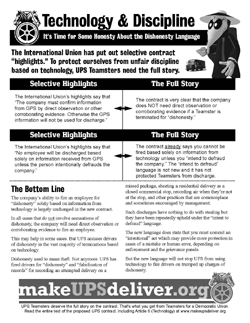 The International Union has put out selective contract "highlights." To protect ourselves from unfair discipline, UPS Teamsters need the full story.

Selective Highlights
The International Union's highlights say that "The company must confirm information from GPS by direct observation or other corroborating evidence. Otherwise the GPS information will not be used for discharge."

The Full Story
The contract is very clear that UPS does not need direct observation or corroborating evidence if a Teamster is terminated for "dishonesty."

Selective Highlights
The International Union's highlights say that "No employee will be discharged based solely on information received from GPS unless the person intentionally defrauds the company."

The Full Story
The contract already says you cannot be fired based solely on information from technology unless you "intend to defraud the company." The "intend to defraud" language is not new and it has not protected Teamsters from discharge.

The new language does state that you must commit an "intentional" act where you "intend to defraud the company," which may provide some additional protection in cases of a mistake or human error.

The company's ability to fire an employee for "dishonesty" solely based on information from technology is largely unchanged in the new contract.

In all cases that do not involve accusations of dishonesty, the company will need direct observation or corroborating evidence to fire an employee.

This may help in some cases. But UPS accuses drivers of dishonesty in the vast majority of terminations based on technology.

Dishonesty used to mean theft. Not anymore. UPS has fired drivers for "dishonesty" and "falsification of records" for recording an attempted delivery on a missed package, sheeting a residential delivery as a closed commercial stop, recording air when they're not at the stop, and other practices that are commonplace and sometimes encouraged by management.

Such discharges have nothing to do with stealing but they have been repeatedly upheld under the "intent to defraud" language.

If a driver makes an isolated mistake, the new language may help protect them from termination depending on enforcement. But the new language will not stop UPS from using technology to fire drivers on trumped up charges of dishonesty.

Read the Language for Yourself

Read the contract language and decide for yourself.

Here's the relevant language from Article 6 (Technology). Bold and underlined text is proposed new language. The rest of the language is from the current contract, including the "intend to defraud the company" language.

"No employee shall be discharged on a first offense if such discharge is based solely upon information received from GPS or any successor system unless he/she engages in dishonesty (defined for the purposes of this paragraph as any intentional act or omission by an employee where he/she intends to defraud the company. The Company must confirm by direct observation or other corroborating evidence any other violations warranting discharge."

The Company acknowledges that there have been problems with the utilization of technology in the past. Therefore, at the request of the Union's Joint National Negotiating Committee Co-Chair a meeting will be scheduled with the Company Co-Chair to discuss any alleged misuse of technology for disciplinary purposes and what steps are necessary to remedy any misuse.

<< Click here to go back to Complete UPS Contract Coverage.