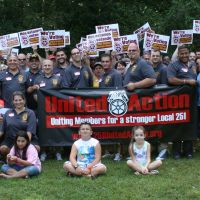 October 31, 2013: The 5,000 Teamsters of Rhode Island today elected a new team of officers to lead their local forward, in a major reform win.

All ten candidates on the United Action slate were victorious, and will take office on January 1 as the new union officers and representatives.

Bairos, who made salaries of $187,999 in 2012, is an officer with the New England Joint Council and on the International Union payroll, as well as the head of Local 251. His campaign featured a barrage of negative attacks against the challengers and against TDU, the reform Teamster movement.

In the United Action campaign literature, Taibi stated that, "For too long, Local 251 officials have run our union to benefit themselves, instead of the members. United Action will put the power of our union behind the membership to fight for better contracts and stand up to employers who are violating our rights."