September 11, 2009: In a tough economy, management is squeezing UPS Teamsters more than ever.

We’ve got contract language to protect us. So why isn’t it being enforced?

In a tough economy, management is pushing UPS Teamsters harder than ever.

“Our District Manager told us straight out at a PCM that volume is down so we’re going to have to squeeze more out of you,” said Ken Reiman, a Local 804 member in Long Island, N.Y.

Interviews with UPSers across the country reveal the tools the company is using to apply this squeeze—and the weak contract enforcement that helps management get away with it.

Across the country, management is demanding higher stops per hour. Ride-alongs are up, both three-day rides and one-day “snapshots.” The company is breaking up routes—especially on Mondays and Fridays—and saddling drivers with additional stops and extra hours.

“Members are complaining about punching out at nine o’clock at night. Some want the hours—but a lot of people would like more time at home with their families,” Reiman said.

Our union can’t make these problems disappear. This is UPS after all. But stronger contract enforcement can protect members from the worst abuses.

Instead, contract enforcement is at an all-time low. The International Union won just four out of 55 cases at the last national grievance panel. Nationally, 9.5 violations are at an all-time high, but 9.5 grievance settlements are down.

“Everyone is just working themselves into the ground,” says Matt Higdon, a shop steward in Atlanta Local 728.

“There’s overwhelming frustration on everything having to do with contract enforcement. Our business agent does a great job. The problem is at the top. Hoffa is in UPS’s pocket and everything trickles down from there,” said. Higdon.

“We’ve got to keep filing grievances and stay relentless. But we’ve also got to get to the source of the problem—and that means changing the leadership at the International Union,” Higdon said.

TDU is about using education and unity to win change.

“Management is really dropping the hammer. Members need to know what their rights are—and how we can make a difference through solidarity and good leadership. That’s where TDU comes in,” said John Virgen a package steward in Sacramento Local 150.

Management Admits The Squeeze Is On

“Our District Manager told us straight out at a PCM that volume is down so we’re going to have to squeeze more out of you.

“Members are complaining about punching out at nine o’clock at night. Some want the hours—but a lot of people would like more time at home with their families.” 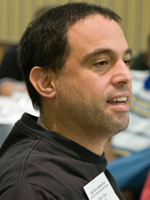 “The TDU Convention is our chance to compare notes with UPS Teamsters from across the country.

“I’m looking forward to sharing strategies on how we can protect members from production harassment and unfair discipline. I also want to hear how UPS is using new technology, like telematics.”