The UPS Contract By the Numbers 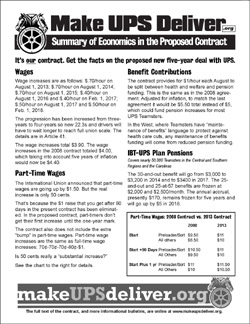 It's our contract. Get the facts on the proposed new five-year deal with UPS.

The progression has been increased from three-years to four-years so new 22.3s and drivers will have to wait longer to reach full union scale. The details are in Article 41.

The International Union announced that part-time wages are going up by $1.50. But the real increase is only 50 cents.

That's because the $1 raise that you get after 90 days in the present contract has been eliminated. In the proposed contract, part-timers don’t get their first increase until the one-year mark.

The contract does not include any catch-up raises for part-timers, just the regular annual wage increases.

The chart below shows the difference.

All members presently in the company-based health plan are being moved out, into the Central States Health and Welfare Fund or other funds with inferior benefits.

Members in company-based plans will face much larger payments for retiree health care. Instead of paying $50/month to cover a retiree and spouse, it will go to $100, then $200 and $300/month by the third year of the contract ($150 for a retiree alone).

IBT-UPS Plan Pensions
Covers nearly 50,000 Teamsters in the Central and Southern Regions and the Carolinas

<< Click here to go back to Complete UPS Contract Coverage.