December 9, 2008: UPS Freight is aiming to be the Scrooge of 2008, by stealing the Christmas holidays from 12,000 Teamster employees. That’s right, the largest transport corporation in the world is trying to escape holiday pay for December 24 and 25. 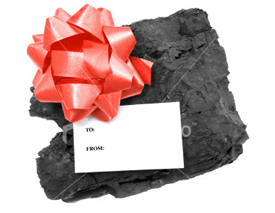 Will they get away with it? That remains to be seen. So far the International Union is treating it as a routine grievance, which may not be settled ‘till long after Christmas.

UPS Freight has declared December 26 to be a “no service day,” and is using that as a trick to steal Christmas. Here’s how: the contract states that Teamsters will get holiday pay “provided they work either the day before and the day after the holiday.” (Article 25, Section 4) The company claims that since no one is working on December 26, they don’t have to pay the two holidays! They will pay a Teamster who uses a personal day for December 26, but those who have used up their paid time off are out of luck.

Note that strange and confusing language “either…and”. How that blunder got into a national contract, we don’t know. But we do know this is theft.

Wilt Warren, a UPS Freight driver in Portland Oregon Local 81 summed it up: “The intent of the contract language was to make sure people didn’t call off the day before or after a holiday. But there’s nothing in there that allows the company to cancel work for a day and cheat Teamsters out of what they’re due.”

Grievances have been filed at numerous terminals. Under Article 7 of the UPS Freight contract, they go to a “UPS Freight Joint Grievance Panel,” a single-employer panel, like the UPS grievance procedure. A national deadlock goes to arbitration.

It would seem that such outrageous case as this one would be an easy win in any reasonable procedure. But so far, it’s not settled.

Christmas should be a joyous time for all our families. Having a rich corporation like UPS try to steal holidays is a lump of coal that should not be tolerated by our union.

Do you have a question about your contract or the Teamsters Union? Click here to send a confidential question to Teamsters for a Democratic Union. A TDU organizer will get back with you.