June 1, 2012: Part-timers and inside workers got sold out in the last contract.

This time, they're organizing to win higher wages, more full-time jobs and a contract that makes UPS deliver for every Teamster.

UPS part-timers and inside workers have launched a national petition drive to demand better pay, more full-time jobs and a contract that delivers for every UPS Teamster.

Click here to find out more and get involved in Make UPS Deliver.

The International Union is preparing to start contract negotiations with UPS this fall. The petition drive is part of a national effort to make sure that any early contract deal doesn’t leave out part-timers and inside workers.

In the last contract negotiations in 2008, the Hoffa administration gave UPS the early deal the company wanted. But part-timers and inside workers walked away empty-handed.

The early deal inked by the International Union froze starting pay for part-timers at $8.50 an hour (now below minimum wage in some areas), lengthened the time it takes new hires to get health benefits, and eliminated the language that makes the company create new full-time 22.3 jobs.

Instead of an annual wage increase, workers got split raises.

Part-timers and other inside workers are building a national contract network through Make UPS Deliver to put pressure on the International Union and the company to negotiate a contract that delivers for all Teamsters—full-time and part-time.

Any contract offer from UPS has to be put to a vote of the members.

"Part-timers and inside workers make up the majority of Teamsters employed at UPS. We have the power to vote down any contract offer that sells us out. But we only have that power if we're organized," said Nick Perry, a shop steward and part-timer in Columbus Local 413.

Perry and UPS stewards and workers from across the country have been meeting by conference call to launch a petition for a strong contract. They are recruiting member volunteers to collect signatures and spread the word where they work at UPS.

"Alone we can only do so much. But if we coordinate nationally and each of us does our part at our building or in our local, then we can be a powerful national voice," said Kamal Kaalund, a shop steward in New York Local 804.

"If UPS sees that we will vote to reject a contract that doesn't deliver for us, then they will be forced to put a better offer on the table."

"Our Right to Vote on the contract gives us power, but only if we use it," Kaalund said 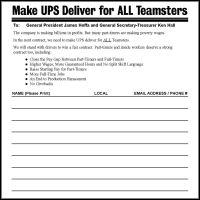 "Part-timers and inside workers have to stand united from the West coast to the East coast to make our voices heard.

"We are getting organized to win a strong, fair contract for all Teamsters."

"I'm a driver but I'm 100% behind this petition drive by part-timers and inside workers. There's strength in unity.

"We've all got to stick together to win a good contract."

"We need to win higher wages and stronger contract language to protect part-timers and inside workers, including stronger bidding and transfer rights based on seniority. If you don't stand for something you'll fall for anything."