December 20, 2010: Many UPS Teamsters are fed up with a grievance procedure that is stacked in favor of management.

UPS Teamsters in Kansas City are not just grumbling–they’re doing something about it. 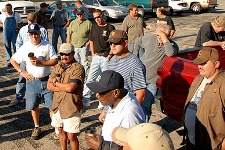 Kansas City Teamsters in the Missouri Kansas Nebraska Conference are fed up with a grievance procedure that is stacked in favor of management. And they’re not taking it lying down.

Members have formed the MOKAN Watch, a group of Teamsters dedicated to shining a spotlight on problems in the Missouri-Kansas UPS grievance panel and improving panel decisions.

UPSers are routinely fired for petty, retaliatory, or bogus charges. With an imminent threat of going before a state grievance panel that is upholding terminations at an alarming rate for first time offenders, Teamsters are often forced to accept outrageous deals or compromises.

MOKAN Watch kicked off with a meeting in the union hall parking lot before the Oct. 9 Local 41 general meeting. At that meeting, they made a motion to invite Jim Kabell, the president of the Missouri-Kansas-Nebraska conference of Teamsters, to the November meeting.

Kabell graciously attended, and he got an earful from the 60 to 70 UPSers in attendance, many of them victims of the “Mo-Kan Railroad” as this grievance panel has come to be called.

The Mo-Kan Watch continues to meet, organize, monitor, and expose any and all unjust panel decisions. “The demands of the MOKAN WATCH are simple,” said Wes Epperson, KC feeder driver, “We want accountability and transparency from the members of our Mo-Kan panel”.