January 30, 2009: Four years ago, U.S. unions split into two federations. Now they’re talking about getting back together.

On Jan. 7, twelve presidents from the two rival union federations—the AFL-CIO and Change to Win—and the National Education Association met to discuss forming one united federation.

Teamster General President Jim Hoffa participated in the meeting. In 2005, Hoffa took the Teamsters Union into Change to Win when the new federation split from the AFL-CIO.

The magazine Labor Notes is running a series of viewpoints on the possible reunification. Here’s what Tom Leedham, Secretary-Treasurer of Local 206 in Oregon, had to say about the possible merger. 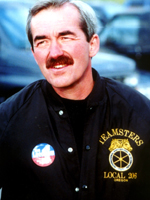 Tom LeedhamThe decision by some big unions to split from the AFL-CIO and form Change to Win in 2005 was top-down. Local union leaders were not consulted, much less rank-and-file union members.

Now leaders at the top appear to be moving toward reunification—again with no involvement of local leaders or members. But neither decision has had much effect on the working men and women who pay the dues.

CTW unions typically criticized the AFL-CIO for too much emphasis on politics and not enough on organizing. Earlier discussions (some referred to it as a debate within the labor movement) centered on the structure of organized labor and the need for consolidation of unions around industry segments.

Missing from the debate was any discussion of how decisions within the labor movement are made and how the decision-makers are chosen. There were lots of comments about the need for change and stodgy, ineffective leadership, but barely a whisper about the accountability or worker involvement that real democracy would bring.

Three and a half years later, few working people could list any accomplishments of the breakup, if they’re aware of it at all. Is the talk of reunification now an indication that the problems earlier reported have been addressed?

It doesn’t seem that way. Unions that complained of too much emphasis on politics spent record amounts of political money in both 2006 and 2008.

Organizing has continued to be largely the responsibility of individual unions rather than multi-union efforts, not significantly different than prior to the split. For unions like the Teamsters that have increased organizing numbers, it’s unlikely that they would credit that success to any umbrella organization.

If everyday union members have experienced anything as a result of the split, it is likely to be weaker local and state labor organizations, which has meant less member mobilization across unions for mutual support. Jobs with Justice has had to try to fill this gap.

There may be new and compelling reasons to rebuild one “House of Labor.” The Employee Free Choice Act, if passed in its current form, will lead to more union members, but it will also motivate employers to shop for compliant unions.

At the first sign of legitimate organizing, they’ll rush to sign up their employees with corrupt or company-oriented unions rather than having to deal with honest, more militant labor organizations. A new federation must establish a strong and fair judicial process to minimize employers’ ability to union-shop.

Reunification seems to be on the table primarily because President Obama has expressed a preference for dealing with just one federation. We should insist that the president listen to diverse voices of labor, not just one top leader.

Mending the split will, however, give cover to leaders deserving of criticism. It’s rare indeed for a federation president to openly criticize a member organization or its leadership.

Clearly at this time of challenge, labor needs more inclusion, more debate, and more accountability. Without these basic democratic concepts we risk finding ourselves in the same position three years from now.

Tom Leedham is the Secretary-Treasurer of Teamsters Local 206 in Oregon.