Walmart Workers Get a Raise. Hear that UPS?

February 23, 2015: Starting wages for Walmart workers will soon match starting pay for part-timers at UPS. What’s wrong with this picture? 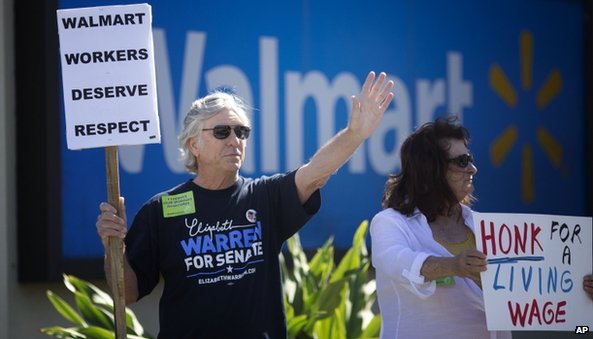 Walmart announced it is raising its minimum wage to $9 an hour and that starting pay will be hiked to $10 an hour in February 2016.

That means wages at Walmart, the nation’s biggest exploiter of low-wage labor, will match starting pay at UPS under our union’s biggest contract. That’s just embarrassing.

Even worse, the contract inked this year by Hoffa and Hall freezes starting pay for part-timers at the $10 level through 2018. Minimum wages are already higher than that in several cities—and many states and even the federal government are considering minimum wage hikes that would top $10 an hour.

Anyway you slice it, part-time starting pay at UPS is a scandal.

Walmart executives aren’t raising wages out of the goodness of their hearts. They are doing it to combat turnover and because the company has been the target of a nationwide grassroots campaign by workers, labor unions and community groups.

The Teamsters Union backs this campaign—and we should. But we should also be taking care of business in our own backyard, starting with UPS. A company that hauls in $4 billion a year in profits shouldn’t be paying anyone $10 an hour.

It’s time to End Part-Time Poverty from Walmart to UPS.