Warehouse of the Future: Inside Ralphs' New Automated Facility

Local 572 steward Frank Halstead got to tour the new facility. Here’s what he saw.

Teamster Voice interviewed him about his tour of the new automated facility in Paramount, and what’s at stake in grocery negotiations this year. 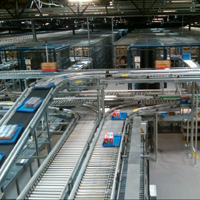 Teamster Voice: What was your first impression of the Paramount warehouse?

My warehouse in Compton has over 1,100 Teamsters working there. This one has 140.

This warehouse only handles dry grocery.

But Ralphs is already remodeling a portion of the perishable section in Compton. They’ll have a new automated Perishable Service Center up and running next year.

Many Teamster jobs could be at stake.

The members are separated into different areas. You don’t see people talking or interacting.

Warehouse Teamsters always said that they could never automate what we do. Now they have.

TV: What does the new technology look like in action?

They store about half the cases on the pallets they came in on. The other half get stored on trays.

The trays are stored on these big vertical shelves. A crane goes up and down the aisle, pulling trays and moving them down to a conveyor belt.

That crane is always doing two things at once—if it’s pulling one tray, it’s also taking another tray to put up.

Then the case goes on a conveyor belt to a Case Order Machine (COM). The COM perfectly positions each case on a pallet—there’s no wasted space.

The system knows each case’s weight, measurements, and weight capacity. The COM knows which cases go on the bottom, which go in the middle, and which should go on top.

Finally, the pallet goes onto a machine that shrink-wraps it. Then it’s ready to be loaded onto a truck.

TV: What do the workers do?

There are a few traditional jobs that remain—and then there are new positions that are created by the new technology.

There are Equipment Operators who are assigned to a section. They have a schematic of their area. When a sensor goes off—like when a piece of shrink wrap is hanging off a pallet—it’s their job to go and correct the problem.

They still use nonunion lumpers to unload the trucks.

TV: What should the IBT and locals be doing to protect jobs?

This technology is a game-changer. But the International doesn’t have a game plan.

First of all, we need to capture the lumper work under Teamster agreements. Those should be Teamster jobs.

We should also be fighting for job retraining for the Teamsters who lose their jobs, to go into maintenance or become drivers.

There are many other areas that need to be addressed about automation and the way it will affect Teamster jobs.

Local 630 is filing grievances over some of these issues. Bad idea. We can’t afford to risk getting a bad decision from an arbitrator.

We need to fight for job protection at the bargaining table this year. The contract is our chance to win the job protections we deserve.

This machinery is incredibly expensive. They’re not going to roll it out overnight. Now is the time to prepare for the future.