August 1, 2008: More than 80 Teamsters wear TDU T-shirts to work every Thursday at the UPS hub in Manhattan.

Our message? We are informed and united Teamsters working together to enforce our rights and rebuild union power.

There is a question being asked by the Local 804 rank and file at the 43rd Street Hub and the question is: “What happened to the local that we were once proud of?” 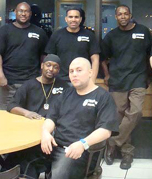 The recent giveback contract cemented our feelings on this question. My opinion is that Local 804 has become too much of a private club and members are not invited to join. Sure, our officials still handle grievances. However, I find it amusing when they win a grievance and then they obligate a member or members to take a photo with check in hand to show how magnanimous they are.

We once had a union that we were proud of, but let’s face it: the Hoffa crowd at Local 804, as well as in the International Union, has lost their moral compass.

That is why I decided to join Teamsters for a Democratic Union. This organization of proud Teamsters and union organizers has given us information and facts while those whom we have placed our trust in have not!

A Sea of Solidarity

I find it quite interesting that UPS management and local officials, who were recently touting how great our contract was, were once again united in fear and anger when they started seeing more than 80 rank-and-file Teamsters wearing 100% cotton pre-shrunk t-shirts at the 43rd Street Hub every Thursday.

Could it be the large TDU logo on the back of the shirts? You bet! And I wear it with pride.

I can understand why UPS management reacts when they see a sea of Teamsters uniting in solidarity. That is what UPS fears the most.

But why the negativity from our local officials? The slogan of the Local 804 Members United movement is: Informed and United Teamsters Building a Strong Local 804. Which part of that equation does our Executive Board have a problem with?

We are not “dividers,” nor are we “troublemakers.” We are proud and powerful rank-and-file Teamsters—men and women—who are uniting and working together to enforce our rights and rebuild our union’s power.

Our involvement is paying off. In the last eight months, we have voted down contract givebacks, beaten pension cuts, passed bylaws that require our Executive Board to give members real information about our benefit funds and during contract negotiations, and exposed the loss of $18 million in assets by our Local 804 Health Fund.

The power of our once proud union is on the decline. But it doesn’t have to be that way. At the 43rd Street hub, we are doing what we can to put the movement back in the labor movement.