Will New Grocery Contracts Save Jobs?

February 26, 2010: Contracts covering thousands of Southern California grocery and warehouse Teamsters are up this fall.

Teamster warehouse jobs are on the line.

Contracts expire in September for over 8,000 Teamsters in seven locals at some of Southern California’s biggest grocers and warehouses, including Albertsons, Ralphs, Vons/Safeway, Unified, and more.

The future of union jobs in warehousing is at stake. Just ask Teamsters at Ralphs.

This year, Ralphs opened a brand-new automated warehouse in Paramount, Calif. that uses new technology to select cases, prepare orders, and wrap pallets—drastically cutting the number of Teamsters needed to do the job.

In April, Ralphs is planning the first wave of lay-offs. Eventually, the company expects that over 240 workers will lose their jobs to the Paramount facility.

Next year, there will be more cuts when the company remodels a portion of the existing Perishable Service Center in Compton with a new automated perishable section—threatening many of the over 400 Teamster warehouse jobs there.

Automation is spreading slowly. The machinery is extremely expensive.

But it is coming.

Language that is negotiated in this bargaining round can help protect Teamster jobs for years to come. What do we need?

You can bet employers are planning that long in advance. Our union needs to fight for language now that prepares us for the new technology that’s coming down the road.

Another sticking point could be seniority rights. It’s no secret we’re bargaining in a tough economy. Will more Teamster officials be tempted to trade in our working conditions and Teamster standards like Kenny did last year?

“I’ve been working at Unified for 21 years, and I’ve always trusted that someone else will get the job done,” said Dan Nash, a Local 630 member at Unified in Santa Fe Springs.

At Unified, the company has been violating members’ seniority rights on holiday extra work. Members are pushing for less ambiguous language.

“This year the stakes are just too high,” said Nash. “I’m paying attention and I’m going to make sure my voice is heard early.”

Time to Do Our Part 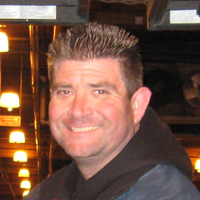 “I’ve worked at Unified for 21 years, and I’ve always trusted that someone else will get the job done.

“This year the stakes are just too high. I’m paying attention and I’m going to make sure my voice is heard early.”