May 24, 2013: With nonunion competition on the rise, 800 Teamster movers in New York City won contracts that protect their healthcare, reduce two-tier wage gaps, and put more union movers to work. Here's how.

"Getting started early and involving members every step of the way was key," says Phil Puma, a shop steward and member of the contract negotiating committee. 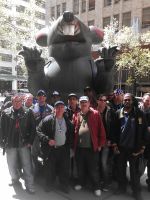 Local 814 members started organizing a year before their contract expired, beginning by distributing a contract survey to determine key bargaining issues and getting members thinking about the contract. Preserving employer-paid healthcare, raising wages for lower-tier movers, and ensuring more work for members emerged as top issues.

As the contract expiration date neared, the union stepped up the pressure.

In the final weeks, the union gave the companies a deadline and "Strike Vote on Sunday" leaflets were posted and passed out at jobs. Blast text alerts were sent out and members rallied at job sites. As a credible strike threat mounted, some companies moved to settle with the union, increasing the pressure on other hardline employers who feared they would lose business during a strike to competitors who had already signed a contract with the union. 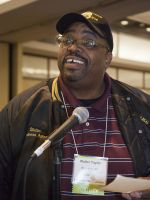 "Management started to get real when they saw all the members united, wearing contract buttons, and talking up the strike vote," said Phil Puma.

The agreement fully protects employer-paid healthcare, promotes many lower-paid movers to the top wage rate, and creates a new dispatch system that will ensure work goes to Local 814 members who need it.

"The companies have always wanted to create tiers and permanently lower wages in the industry," says Local 814 Business Agent Walter Taylor. "For the first time, we've reversed this. By raising wages for the lower tier, we opened a door to better pay that the companies wanted to slam shut forever."