June 22, 2009: The International Union is in talks with YRC with a proposal to defer employer pension contributions for 14 months. The aim is to help restore the company’s profitability. 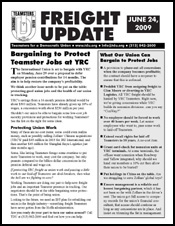 Download a bulletin you can distribute to other freight Teamsters.We think another issue needs to be put on the table: protecting good union jobs and the health of our union in trucking.

The corporation’s savings from a 14-month pension deferral would be about $500 million. Teamsters have already given up 10% of wages, a concession worth about $230 million per year. Click here for more details on the proposed pension deferral.

Considering these monetary concessions, shouldn’t our union be able to bargain some low-cost job security provisions and protections for working Teamsters? At a minimum:

Many of these are no-cost items; some could even realize money, such as possibly selling Zollars’ Chinese acquisitions (YRCW paid $45 million in 2005 for JHJ International, and then another $45 million for Shanghai Jiayu Logistics just nine months ago.) Some, like letting Teamsters forego some overtime to put more Teamsters to work, may cost the company, but only peanuts compared to the billion dollar concessions in the pension deferral and wage cut.

If protecting YRC freight as union work and passing a little work to our laid off Teamsters are deal-breakers, then what the hell are we fighting to save?

Working Teamsters are doing our part to help save freight jobs and an important Teamster presence in trucking. Our negotiators should be at the table bargaining some protections. That’s the point of being union.

Looking to the future, we need an IBT plan for rebuilding our union in the freight industry—something freight Teamsters have never gotten from the Hoffa administration. Click here to read more.

Click here to let us know what you think about these proposals, or add your ideas on what our union should put forward.