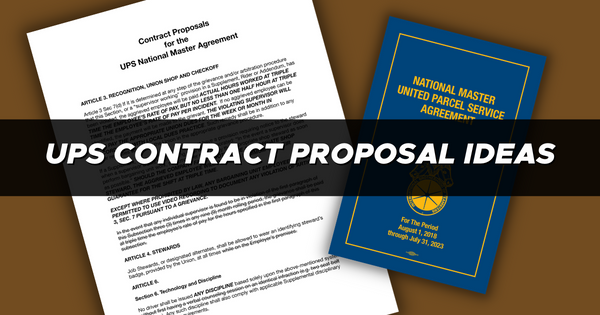 The sample contract proposals are the product of months of discussion by rank-and-file members on a popular Facebook Group “UPS Teamsters 2023 Contract”.

Thousands of members contributed ideas and comments for changes they want to see in the contract.

Now, the Facebook page administrators have compiled their ideas for changes to the National Master Agreement for Teamsters at UPS to read, review, and talk over in advance of local union proposal meetings.

The sample proposals are not meant to be the final word on anything. Their purpose is to get Teamsters talking and thinking about what we want to fight for in our contract and how we can move from problems to solutions at UPS.

You can join the UPS Teamsters 2023 Contract Facebook group here.

To submit a national contract proposal at your local union proposal meeting, download and fill out this form. Every proposal submitted by a local union will be reviewed by the National Negotiating Committee.

Contract negotiations will begin in 2023. Area supplements will be negotiated before the National Master Agreement. To learn more about the supplements, take a look at the UPS Supplement Comparison Tool.