The moment you may have been dreading arrived June 27, when the Supreme Court imposed the open shop on the public sector nationwide with its decision in Janus v. AFSCME District 31.

Instead of the usual mix of articles, this month we’re sharing a special expanded issue of Labor Notes devoted to one topic: our survival guide for rebuilding power in open-shop America. (Are you in the private sector and think this won’t affect you? Don’t get too cozy.)

Janus is a serious blow—but we have good news. As plenty of unions in open-shop states and sectors can testify, it’s still possible to win campaigns and maintain high membership rates despite the legal hurdles. We talked to workers in schools, factories, buses, hospitals, oil refineries, grocery stores, post offices, and shipyards. This guide reveals the principles and practical steps behind their successes.

Here’s the punchline: the unions that build power in open-shop America will be the ones that fight hard on workplace issues their members care about, and where large numbers of rank-and-file members take on their own fights. 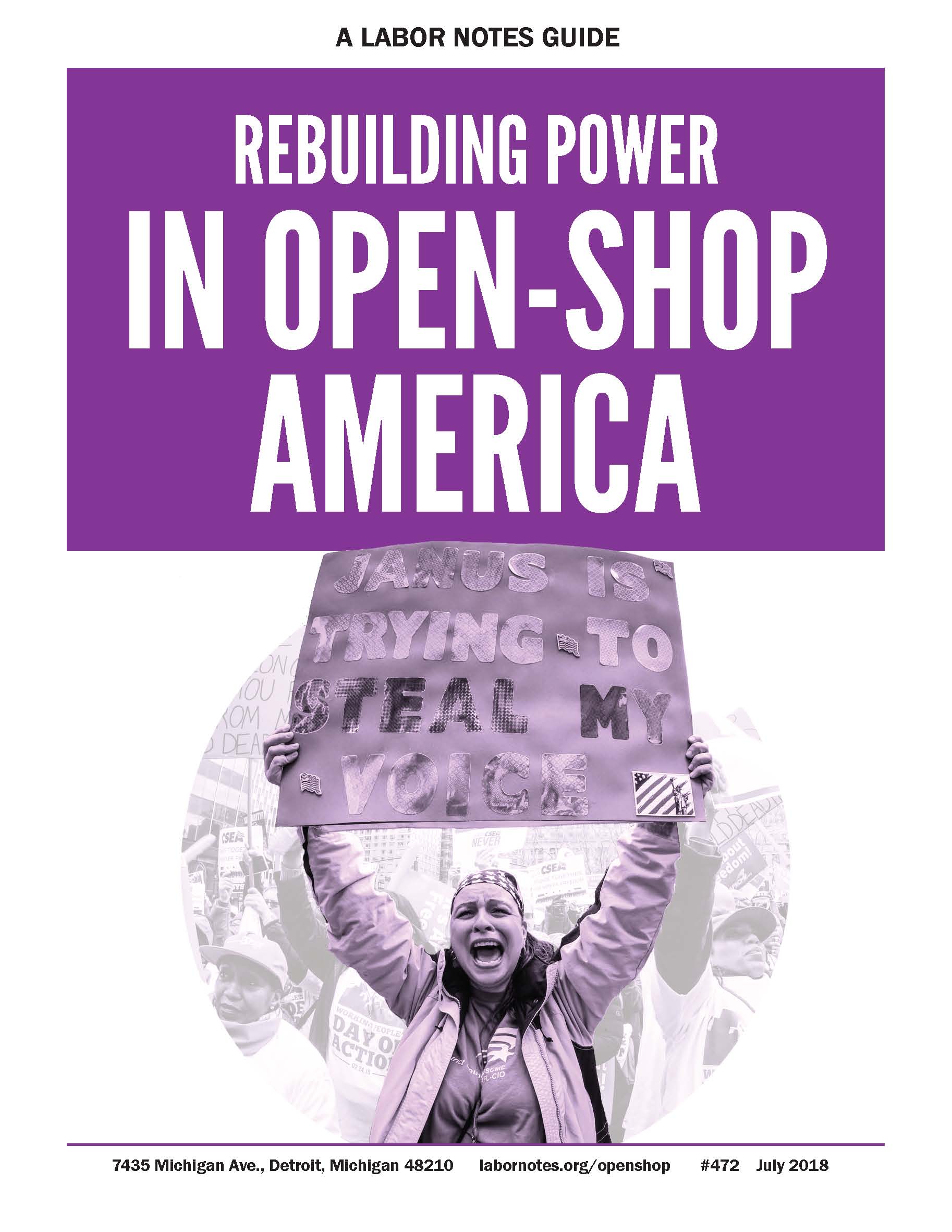 How We Got Here
Our Prescription
The Racist History of Right to Work
Who’s Next?
The Anti-Union Game Plan

Exercise: The Open-Shop Stress Test
Quiz: Assess Your Danger Level
Jump-Starting a Weak Union from Below

How We Got Here

Unions are vulnerable to opting out, as members wonder what’s in it for them. The good news is that members will stick with a union that’s visible and vocal in the workplace.

The consequences will hit us all—driving down standards, draining union coffers, diminishing labor’s political and community power, and painting a big red target on the remaining 5 million private sector union members in states that still allow an agency shop.

The Threat Is Real

The Janus decision is the latest hit in a decades-long onslaught by employers and the 1%, bent on weakening workers’ power and drawing wealth upward. This isn’t the first blow, or the second.

The looming threat of Janus has forced many unions to try to reconnect with their own members—but often the approach is too shallow.

What’s needed is not a better sales pitch. It’s getting back to basics. Prospective members will be won by deeds. Why would you join an organization unless you’re convinced it has power?

A union’s power rests on how many workers will act together and how strong an action they will take.

Even dues-payers represent only potential power. The more important numbers are how many workers have caught the spirit of solidarity, how many will stand together on the job, how many are training their co-workers to see through the boss’s agenda, how many will go to the mat for the union because it’s theirorganization.

It becomes their organization when “the union” doesn’t mean “those people down at the hall” but “you and me acting together every day on the job to defend our rights.” It’s people collectively keeping supervisors in line, enforcing their right to take breaks, finding ways around over-monitoring, making sure the new hires are welcomed and schooled.

If union members are tackling these questions, people will flock to join—open shop or not.

It's Simple, But Not Easy

What’s required to make unions real to their members is no mystery. That doesn’t make it easy. Getting back to basics requires breaking old habits, bulking up unused muscles, and a lot of listening. But we’d be fooling ourselves to say there’s an easier path.

This pamphlet starts off with a review of where we stand now and a warning of what’s coming down the pike. Anti-union maniacs won’t stop at the open shop.

Next are exercises to assess the threat level for your own union. Try the “open-shop stress test” to start a conversation in your next steward meeting. Take the quiz.

Then we get down to brass tacks. Here’s our prescription for a union that can withstand the worst the employers will dish out:

1. Be Democratic. We need to exponentially expand the number of us who have the skills, confidence, and authority to be the union. Leaders should welcome, not begrudge, rank-and-file initiative, and do everything they can to help it happen.

2. Fight the Boss. People will join a union that they see winning fights that matter. Getting into the right fights, and winning some of them, is just as important to your union’s post-Janus survival as asking people to sign a membership card.

3. Turn Up the Heat. To win big fights takes more than action and passion—it takes a plan, and it takes time. A series of gradually increasing actions, such as a contract campaign, aims maximum pressure at your target… and builds members’ confidence and unity along the way.

4. Ask People to Join. They won’t join if you don’t ask. Asking them to become members should become a natural step in your everyday organizing—not a separate project that sucks energy from other campaigns.

5. Count Noses. Create maps and charts to track participation—and know how to recognize a natural leader.

6. Don't Go It Alone. Shrinking unions can’t afford to isolate ourselves. But why would we want to? Our interests are the public interests.

There’s one more reason not to give up hope in open-shop America: we can’t afford to.

Think about the people in your union who have stuck with it. It’s usually because the union means something deeper to them than a single issue or a cold cost-benefit analysis. They feel other workers’ fights as their own. They feel the struggle in their bones, connected to their deepest-held values. Isn’t that true for you?

The world needs legions more people like that. Struggle in the workplace transforms each of us in a way the bosses can never undo. It teaches us that we have power—and how to use it.

Look at the mess we’re in—most jobs suck, the government's being unraveled, part-time is the new normal, bad guys are laughing their way to the bank, and our planet is on the verge of eco-catastrophe. Turning it all around will require millions of righteous people to put their shoulders to the wheel.

Your workplace, and every workplace, is the training ground to build a better world.