The hearing of disgraced IBT Vice President President Rome Aloise before Judge Barbara Jones begins today. Aloise has been found guilty by more independent Election Supervisors and anti-corruption officers than any other Teamster official. Rome’s latest hearing on racketeering and other charges may well be his last. 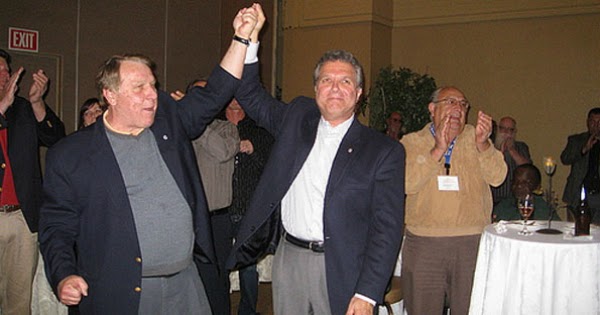 Aloise is expected to be suspended or barred from Teamster for life from the Teamsters on charges of racketeering, harming fellow Teamsters, retaliating against members, and secretly running Oakland Local 853 and Northern California Joint Council 7 while he was suspended from Teamster office.

Aloise’s crimes against our union are well-documented and go back more than two decades.

In 2006, Aloise was found guilty of threatening to withhold strike support from 1,600 striking grocery Teamsters unless their principal officer resigned from a slate that was running against Hoffa.

In 2010, Aloise was found guilty of trying to bribe three Teamster officers with IBT jobs in exchange for their support of the Hoffa Campaign.

In 2011, Aloise was found guilty of expelling a member in retaliation for criticizing Aloise.

In 2013, when Teamsters at Southern Wine & Spirits voted to reject a substandard contract, Aloise intervened in the negotiations to force through the weak deal, and solicited SWS executives for $9,600 worth of tickets to the Playboy Party at the Super Bowl, an illegal employer gift.

In 2015, Aloise instructed Teamsters to cross a picket line of Waste Management recycle strikers who were paid just $12.50 an hour. Aloise denounced union contract demands for pay increases as unrealistic and called the workers “pawns of their union leadership.” The rest of the labor movement united behind the strikers and they  won hourly wages of $20.94 plus affordable healthcare.

In 2017, Aloise was found guilty of all charges by the Independent Review Board, including accepting gifts from an employer that he gave contract concessions, negotiating a sham union contract with an investment broker, and rigging a local union election.

Aloise was ordered to serve a two-year suspension for these violations. Instead, Rome continued to secretly run Oakland Local 853 and Northern California Joint Council 7 while he was suspended from office.

The result was more charges for which Aloise is now on trial.

Last September, the Hoffa administration and Aloise made a sweetheart deal—brokered by Aloise’s attorney Patrick Szymanski, who is also the counsel for the Vairma-Herrera slate and Hoffa’s former General Counsel—to give Aloise a 30-day suspension.

This suspension deal was promptly rejected by Judge Jones, who set up today’s trial.

Aloise is expected to call a litany of character witnesses to testify to his greatness.

The hearing before Judge Jones could last as long as nine days, and the judge will render her decision some time after that.