Join Teamster leaders and TDU activists—and thousands of other union and worker troublemakers—at the Labor Notes Conference, April 1-3, in Chicago. 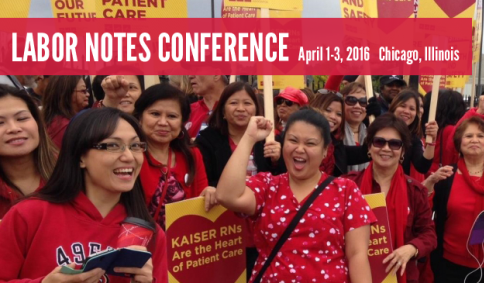 The Labor Notes conference is the biggest conference of union and worker activists there is, bringing together members from across the labor movement who are organizing to take on corporate power and build stronger unions.

Teamster members and leaders, including Fred Zuckerman and other candidates on the Teamsters United slate, will be present.

TDU activists and reform leaders from around the country will join fellow unionists in workshops on bargaining, member-to-member organizing, the movement to save union pensions, and much more. A special meeting for all IBT members from all Teamster jurisdictions will also take place.

Register by Wednesday, February 17, to save $45 and learn more here at Labor Notes.

Or call TDU at 313-842-2600 if you have questions about the conference or what Teamsters will be up to there.