The Treasury Department is holding a critical hearing on Sept. 10 on the rules for Pension Funds that are trying to cut retiree benefits. TDU members and other Teamsters, retirees and spouses will be there to make their voices heard. 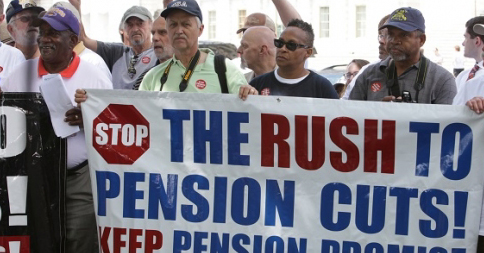 The Central States Pension Fund is trying to impose the worst pension cuts in Teamster history. Other Teamster pension plans may follow suit.

But first, the Treasury Department has to finalize the rules for Funds that are submitting pension cut plans under a new pension law approved by Congress last year.

One of the most controversial would allow the Central States Pension Fund to hold the pension cut vote by telephone instead of mail ballot.

Teamster retirees from grassroots Pension Protect Committees will address the hearing. So will Karen Ferguson, the Executive Director of the PensionRightsCenter.

Members and retirees have also flooded the Treasury Department with online comments.

“We earned our pensions and have every right to them,” commented Butch Lewis a past President of Cincinnati Local 100 and retiree from Holland Freight. “Treasury, and by extension Congress, has to understand we did absolutely nothing wrong and don’t deserve this attack on our retirement security.

“Treasury has the power to slow down the march towards cuts. We need to be heard and real alternatives need to be explored,” Lewis said.