The Treasury Department’s Temporary Regulations would let the Central States Pension Fund (and others) conduct the vote of Teamsters and retirees on proposed pension cuts by telephone poll! 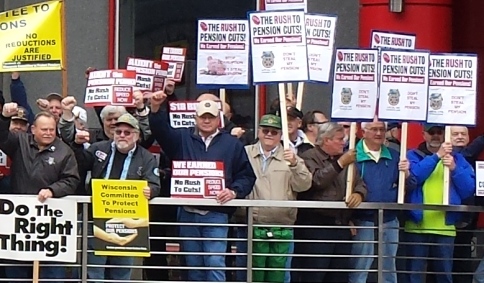 Why would it be allowed for one of the most important votes you would ever make—on a drastic cut to your pension benefits?

Dennis Germain, a retiree from Detroit Local 299 with the Michigan Committee to Protest Pensions, summed it up: “Now Hoffa’s trustees want us to email or phone our vote pertaining to the cut on our pension. It’s bad enough they want to cut our pensions by $10,000 per year forever, but now they are too cheap to send us a paper ballot. This is another way to keep members from voting. I’m surprised they didn't call for a raise of hands.”

On September 10, at a hearing in Washington DC, Teamsters will speak out against this proposed denial of basic voting rights.

Would anyone tolerate voting for Congress by internet voting or telephone poll, instead of a ballot?

Under federal law—The Labor Management Reporting and Disclosure Act—Teamster local unions conduct elections every three years by secret ballot. A ballot comes to you in the mail, and you return it by mail, postage paid.

Next year, 1.3 million Teamsters will get a ballot mailed to them by the Election Supervisor for IBT president and officers. And they can return their ballot by mail, postage paid. Central States has a vastly larger budget than the Teamsters Union.

Central States cannot afford the postage for return ballots, but can pay Thomas Nyhan $662,000 per year, and numerous other execs fat salaries? That’s what the temporary regulation actually claims:  “Voting by marking and mailing back paper ballots would also entail significant additional costs to process (such as employing additional personnel for processing and providing return postage and envelopes).”

Maybe Nyhan could take a 20% cut for one year: That would cover the 48c postage for 276,000 ballots! Or the employer and union trustees could forego their expense payments for one year? That would do it.

Central States spends $38 million per year in administrative expenses. A fair vote would not increase this figure by even 1% for one year!

This regulation is outrageous and must be changed. But it is worse than that. It shows the thinking behind this outrageous pension-cut law. Slash earned pensions. And conduct a bogus “vote” to justify it.

We support and will fight for the Keep Our Pension Promises Act and will demand that the Hoffa administration and the Central States Fund delay the cuts and get behind a positive alternative to save Teamster pensions.