Rail workers – including some 70,000 Teamster engineers, trainmen and track workers – are under a double attack coming from Washington DC. The Teamsters Union should be leading a fight back with other unions and with the public, to save passenger rail service in the USA. 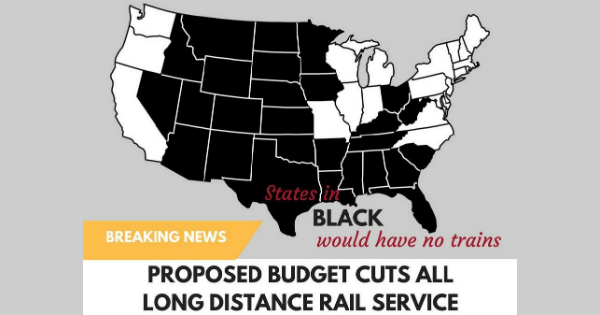 Amtrak: In March, President Trump released his 2018 budget proposal, which includes severe cuts to Amtrak along with the elimination of long-distance rail service. Service in 23 states could be eliminated.

Fortunately, this proposal can be stopped, with the Teamsters Union uniting allies to defend public service and infrastructure jobs.  Read this piece by Teamster engineer Ron Kaminkow, who is the General Secretary of Rail Workers United.

The IBT is urging all Teamsters to contact members of Congress to defend Amtrak.

The other attack is the National Right to Work Act, which was introduced in Congress in February by Republican lawmakers. It would eliminate union security clauses in every rail contract in the USA.

The time for the Teamsters Union to go on political offense is now. The IBT’s appeal to contact Congress is a good start – Teamsters members should take action.

Playing defense at the last minute, whether on pension protection, beating right to work, or saving rail service, is not a winning strategy. Let’s go on the offense.