On March 10, close to 100 Teamster retirees and active members marched on YRC headquarters in Overland Park, Kansas, calling on the company to return to full pension contribution payments to the Central States Pension Fund. 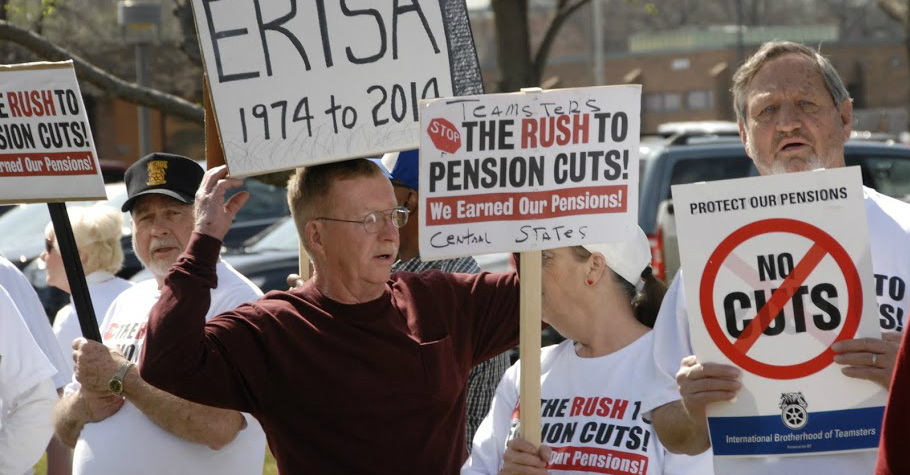 This action is one of several events occurring over the coming days as Pension Action Committees mobilize to garner public support in opposition to proposed pension cuts.

Actions are taking place across the Central States pension region this weekend.

The Missouri – Kansas City Committee to Protect Pensions organized the demonstration to shine a light on YRC management’s disregard for Teamster members’ retirement security and the 15% wage reductions for active members. Retirees face benefits cuts of up to 70% as upper YRC management continues to give themselves annual raises and bonuses.

“This is worse than unfair,” said Dave Scheidt, a retired Roadway dock worker. “Thousands of Teamster retirees that worked long and hard for what became the YRC companies face dire circumstances. YRC execs continue to lead the high life while many of us face potential destitution. YRC needs to be exposed for the role they’re playing in bringing on these pension cuts.”

Scheidt and other Teamsters in the Missouri – Kansas City committee continue to organize opposition to proposed Central States benefit cuts. Their next demonstration will be at the State Capitol Rotunda in Jefferson City, Missouri, on March 31 at noon. The action will focus on the tremendous economic impact the cuts could have on Missouri.

This press advisory lists some of actions taking place.