Time is Urgent: IBT Needs to Get Behind Pension Solution

The Central States Pension Fund is in crisis. Time is running out while Hoffa plays PR games. The Teamsters Union needs to put its muscle behind a real plan to save our pensions for retirees and working Teamsters. 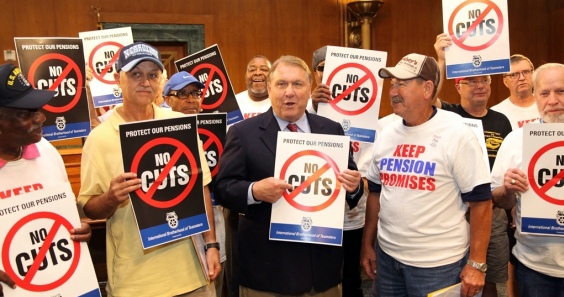 At the June 1 meeting of all Local Unions from the Central and Southern areas in Rosemont, Illinois, Central States Director Thomas Nyhan told the group that time is short, and that the Hoffa plan unveiled earlier by International VP John Murphy cannot work.

Ken Hall surprised the crowd by agreeing that the Hoffa plan will not work. Fred Zuckerman, president of Local 89 and Joint Council 94, agreed that it is urgent, but said he could not back a specific plan without seeing the details.

Joint Councils throughout the Central and South areas are sending resolutions to Hoffa, urging him to work toward a real plan with a “likelihood of avoiding the projected insolvencies… and which do not require current benefit levels of those plans to be reduced by more than 20%.”

The resolutions appear to be aimed at telling the IBT to junk the unworkable Hoffa-Murphy PR plan and put muscle behind a real solution. And that needs to happen.

UPS has put forward a draft plan that CSPF experts say could work, to replace MPRA, and which includes cuts of up to 20%. UPS wants to avoid drastic CSPF cuts or insolvency, because the corporation must make up any losses of pension benefits for UPSers who retired after January 1, 2008.

Teamsters for a Democratic Union (TDU) supports, along with the pension protection movement, the Keep Our Pension Promises Act (KOPPA), which would save pensions by transferring liability for so-called orphan pensions to a fully-funded department of the PBGC.  KOPPA is a real solution, funded by closing corporate tax loopholes.

We recognize that KOPPA likely cannot pass this Congress, and that compromises are necessary by those who will be making the legislative sausage.

Is a 20% cut necessary? The pension protection movement is working for a better solution.

We want to get as close to full pension protection as possible, and a stronger movement and a broader alliance mean a better chance at a good outcome. We need the full muscle of the IBT, to help build a powerful coalition of all advocates for pensions and for seniors.

Hoffa and his pension PR man, John Murphy, have promised a secret solution for nearly three years. Then they finally unveiled an unworkable plan that appears headed for the morgue.

The clock is ticking, and not just on the seven year estimate of CSPF toward insolvency. More and more employers will be trying to pull out of the pension fund, thus weakening the fund even further.

Employers will increasingly tell working Teamsters that it makes no sense to contribute $6000-$18,000 of their deferred wages per year to a pension fund that is going insolvent--and that they would be better off in a 401K.

We stand for solidarity of active Teamsters and retired Teamsters working together to save pensions.

The time is now. The price for failure is devastating to Teamster retirees, to Teamster power, and to America’s commitment to retirement with dignity.