Uniting the Movement to Save Our Pensions

Competing pension bills are being put forward that are dividing the pension protection movement. How can we unite retired and active Teamsters to save our pensions and our pension funds? 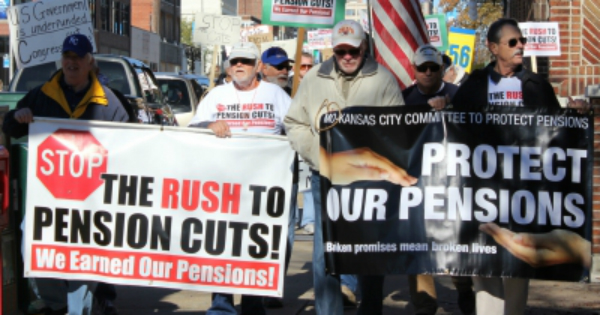 In the coming weeks, two bills aimed at protecting workers’ earned pensions are expected to be introduced in the US Congress.

Those two will be in the hopper, along with the Keep Our Pension Promises Act (KOPPA), which has co-sponsorship of a number of Senators and Congressional Reps, and is supported by the pension protection movement, Teamsters for a Democratic Union, and several unions.

For two years, Hoffa’s pension spokesperson, John Murphy, has repeatedly promised that the IBT will get bipartisan support for a pension protection bill.

Now, Ohio Senator Sherrod Brown will introduce the Hoffa-backed bill, which provides for long-term loans to troubled pension funds and no benefit cuts.

This sounds great. The problem is this bill is not expected to gain bipartisan support. That is precisely why KOPPA, which is a viable solution, has stalled.

Most Teamster local and Joint Council officers and various Teamster pension funds have therefore rejected Hoffa’s approach, in favor of a strategy that could gather enough support to pass.

On September 20, the vast majority of Teamster local officers assembled in Chicago listened to John Murphy and then voted to reject his approach, in favor of a potential bill supported by UPS and the Central States Fund and other pension funds.

This bill will provide for pension cuts of up to 20% and “shared sacrifice” provisions to provide funding that will shore up pension funds for the long term.

The pension protection movement is holding out for no cuts, and many are reluctant at this point to embrace a compromise that could pass Congress. You can understand why.

From the start, there has been some tension in the movement between the interests of retirees and active Teamsters.

Some retirees feel that even if the fund is going to run dry, they should retain full pensions until it does.

But that would leave zero for active Teamsters who have worked a lifetime, and are yet to collect a dime.

And it would greatly weaken our union, which needs viable pension funds as a key element of Teamster power.

We need to stand united and fight to save the pensions of retirees and actives—and to save our pension fund for the future.

TDU continues to support KOPPA, which is the no-cuts bill.

We also realize that compromise and shared sacrifice will be part of any solution to the problem.

If the bill backed by UPS and most Teamster officers moves forward, we will fight for the best possible provisions, because almost no bill gets through Congress exactly as originally proposed.  And the corporate lobbyists will be busy working against us.

We are in this to win the best possible solution to protect pensions and to protect Teamsters in the future.

We call on the Hoffa administration to quit the grandstanding and to work with the vast majority of Teamster officers – most of them Hoffa supporters – who want the Teamsters to unite around a plan to save our pensions and our pension fund.