More than 500 members joined our UPS Teamsters United zoom event on Sunday to hear a report from the International Union’s UPS Contract Campaign Coordinator on the Teamster Call to Action starting August 1-5. We went over the timeline for the contract campaign, heard reports from members on upcoming workplace actions, and talked about how to get involved. Find out what you missed. 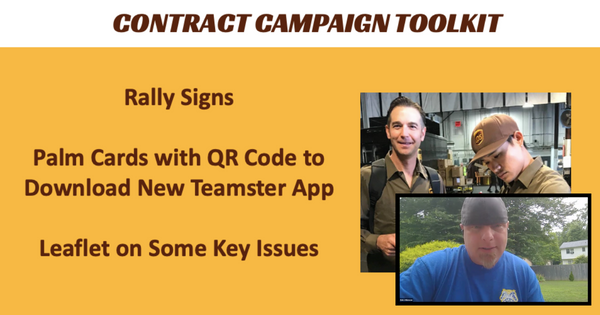 The International Union is kicking off the UPS contract campaign with a call to action and every local union is being asked to participate.

UPS Contract Campaign Coordinator Rob Atkinson reported on the IBT’s plans which include a toolkit with rally signs, a leaflet, and a palm card with a QR code that is linked to a new app for UPS Teamsters.

The new app will include regular updates and news on negotiations, Steward’s Guide, a contract timeline, and bargaining polls where you can mark your top issues you want our union to address. .

Contract campaign materials will be distributed to members at rallies and in parking lots, starting August 1-5.

Contact your local union or UPS Teamsters United to volunteer and get involved. 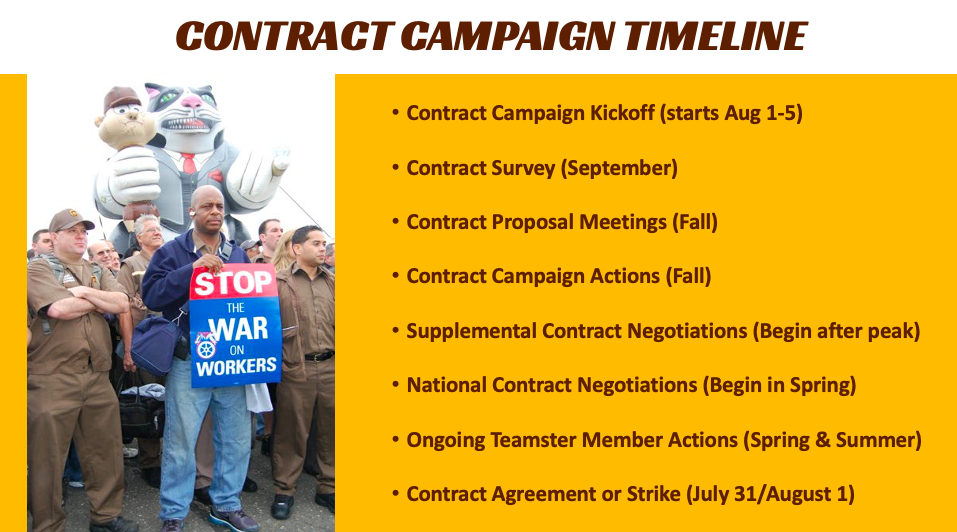 The Call to Action will kick off with Teamster actions August 1-5. But the contract campaign is ongoing.

In September, every member will be asked to fill out a bargaining survey to identify their priorities for the contract.

Local unions will hold contract proposal meetings in November where members can submit proposals for consideration by the negotiating committee.

Throughout the fall, the International Union will be organizing contract campaign actions to mobilize and unite members.

Negotiations for Supplements and Riders to the national contract will begin after peak. For the first time, there will be rank-and-file Teamsters on every negotiating committee.

National contract negotiations will begin in the spring and continue through the summer.

There will be member mobilizations organized by the International Union throughout that time. Sean O'Brien and Fred Zuckerman will be leading the negotiations.

The contract expires on July 31, 2023 and President O’Brien has set this as a firm deadline for management.

Member Action Is the Key

We’ve elected International Union leadership that will stand behind the members. But it won’t mean anything if we don’t stand up for ourselves.

UPS Teamsters are hard at work right now, organizing contract campaign activities for the week of August 1-5 and beyond.

On the call, members reported on plans to pass out contract information, hold parking lot rallies, and organize UPS Teamsters United workshops on how to win the contract we deserve.

UPS Teamsters United is a grassroots network of Teamster members. We are independent of the IBT and organized this zoom event to support the Teamster contract campaign at UPS.

UPS Teamsters United is sponsored by Teamsters for a Democratic Union. Act now and join TDU and get a two-year membership for just $50—half-off the normal price.