Central States Pension Fund officials say that they will announce what pension cuts they want to make – and by exactly how much to whom – around August 31. Who’s calling the shots – and how much money do they make? 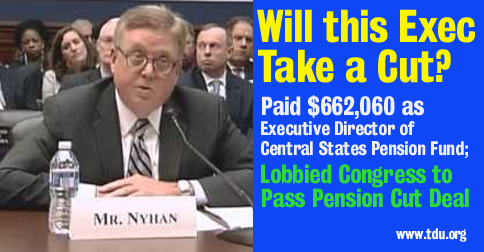 We know the Hoffa administration set the stage for the cuts and has cheered them on. We know the eight trustees of the fund – four employer and four Teamster trustees – made the decision. And we also know that a bunch of high-paid executives at the fund have called the shots.

Take a look at the 33 people at the Central States Fund who make $7.5 million per year in aggregate. Thomas Nyhan made $662,060 in 2013 (2014 figures are not available yet). And a half dozen others made over $300,000. The chart indicates that they all get salaries from both the Central States H&W Fund and the Central States Pension Fund.

The Trustees of the Fund make a whole lot less. Union officers, such as Chuck Wrobrey of Local 215 or Marvin Kropp of St Louis Joint Council 13, are forbidden by law to receive a salary as a pension trustee. They do get expenses, as this chart reflects. Kropp is a new appointee so he's not on the 2013 list.

The four union-appointed trustees are Hoffa supporters. Hoffa has not even sent them an open letter asking them to hold off on cuts or give members a second opinion through an independent audit. Nor has Hoffa asked local unions to make that request of the union trustees.

Fortunately Teamster members and retirees are not waiting for the executives or Hoffa. They continue to build a movement to stop the cuts and provide a better solution, and they will be in Washington DC on September 10 to be heard at the Treasury Department.

Click here to learn more or get involved in the fight to save our pensions.