“We are fed up!” That was the message delivered on picket signs and with a united voice at the Freight National Grievance Panel in San Diego on July 12. 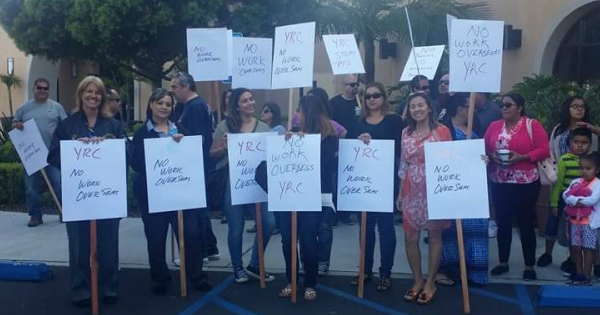 They summed it up with “WE ARE FED UP, with hundreds of jobs going to overseas call centers. We are TIRED of hearing that we voted for the MOU. The IBT should be protecting Teamster jobs, not making excuses.”

That’s why Teamsters showed up at the National Freight Panel, and at 9 am walked in past the room that YRC’s labor people were in. The hotel asked the Teamsters to leave and finally called the police, and the rally continued outside.

YRC office workers covered under the NMFA and the MOU object to the hundreds of bargaining unit office jobs that have been lost to overseas subcontracting, along with a ridiculous number of PTS drivers pulling loads on a daily basis.

Grievances have been filed and deadlocked in 2009, 2010, and 2012 but that’s as far as it’s gone. Hoffa and national freight director Tyson Johnson have not dealt with the issue or forced YRC management to restore the lost jobs, after seven years of job losses and grievances pending. The latest grievance was again deadlocked at the San Diego Panel. The union and company have 15 days to reach a resolution or it moves on to Hoffa’s desk to make a decision on how the IBT will respond.

These dedicated Teamsters have had enough of concessions and a lack of contract enforcement at YRC. Like thousands of other freight Teamsters, they wonder if Hoffa even remembers what union power really means.

They have 15 days to make a decision or it goes straight to Hoffa’s desk at that point they have 30 days. If nothing is done, we will see what the next actions are.